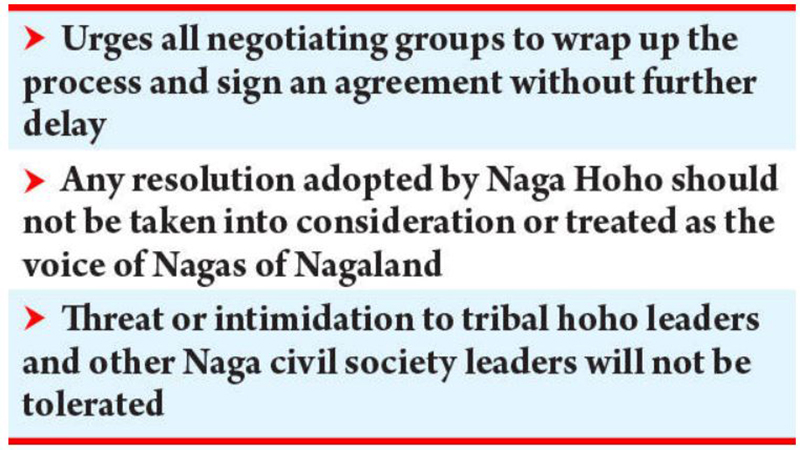 The 14 Tribal Hohos of Nagaland  representing all the 14 tribes of the state, held an emergency meeting at Commissioner Guest House, Kohima on Saturday, where it was unanimously resolved to reaffirm all previous decisions with regard to  Naga solution.

A joint statement by the 14 tribal hohos of Nagaland through its convenor K.T. Vilie and secretary Laji Luyanba expressed appreciation to the Government of India’s official representative, A.K. Mishra for showing utmost urgency in the peace process with an effort to bring the political talks to a logical conclusion

In this regard the apex tribal hohos also urged upon all negotiating entities in the Naga political talks to wrap up the process and sign an agreement without further delay.

The house also discussed and declared that any threat or intimidation to the tribal hoho leaders and other Naga civil society leaders by any group “will not be tolerated and as such shall be confronted publicly by all tribes.”

The house also reaffirmed that the tribal hohos would stand united for the larger interest of Nagas for an early solution.

The hohos also appealed to all the negotiating parties that any part of agreement that required to be implemented in Nagaland should be made known to the tribal hohos of Nagaland before the final solution was signed.

It may be recalled that the 14 Tribal Hohos, in  a statement issued on July 24, had appealed to all the Naga Political Groups to “come out of all the differences and sit together for early settlement” of the Naga political problem.

Further, the tribal hohos also assured that they would always render their fullest cooperation to the state government’s Core Committee on Naga Political issue and the Naga Political Groups in the interest of Naga unity and solution, which were the long-cherished desire of the people.