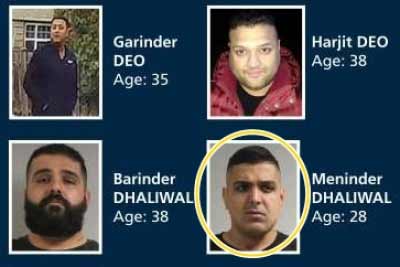 Two Indian-origin men have been charged with the alleged killing of two others in a gang-related violence in Canada, according to police.

They had been arrested shortly after Meninder Dhaliwal and Satindera Gill were shot while being present in their car on Sunday at the British Columbia resort village of Whistler.

“This act was outrageous and shock to the visitors and community of Whistler” and the arrests “are thanks to the real-time information provided and the quick action of the First Responders,” Lee added in a statement on the arrests.

Three others were also arrested but the extent of their involvement in the incident is being investigated, he said.

CityNews quoted Federal police investigators as saying that the shootings were linked to an ongoing gang conflict and the suspects and victims knew each other.

The killing of Dhaliwal and Gill happened 10 days after the unsolved killing of Ripudaman Singh Malik, who had been acquitted of alleged charges of bombing Air India’s Boeing 747 Kanishka in 1985.

The two incidents had eerie similarities: They occurred in broad daylight while the victims were sitting in cars in public places and other cars were found ablaze nearby.

The police officials have not linked the two cases.

Meninder Singh Dhaliwal and his brother Barinder were on the Vancouver Police Department’s list of six “gangsters” — four of them of Indian descent — who “pose a significant risk to the safety of the public”.

The Vancouver Sun said that according to sources, Sahota and Kakh belonged to a gang known as the “United Nations” which had been fighting with the Dhaliwal’s gang called the “Brothers Keeper”.

The newspaper daily said that Sahota had earlier been charged in three armed robberies of drug stores along with Karman Grewal, another “United Nations” gang member.

Grewal was shot dead in May 2021 at Vancouver Airport in what is believed to be retaliation for the killing of Dhaliwal’s brother Barinder in April 2021, the Vancouver Sun added.

While Grewal’s murder remains unsolved, Meninder Dhaliwal was a suspect along with another “Brothers Keeper” member Jaskeert Kalkat, who was also killed in May 2021.