63 killed in rain-related incidents in Gujarat since June 1 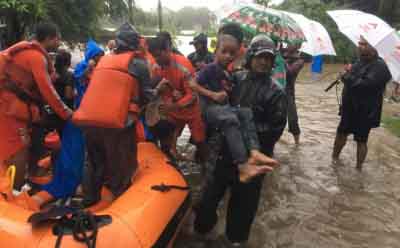 As many as 63 people have lost their lives in rain-related incidents in Gujarat since June 1, of these maximum 33 died due to lightning strikes.

At least eight were killed due to wall collapses, drownings (16), fall of trees (5) and power pole collapse (1), the state Revenue and Disaster Management Minister Rajendra Trivedi said on Monday.

A total of 10,674 citizens from Anand, Devbhoomi Dwarka, Kutch, Porbandar, Chhotaudepur, Tapi, Navsari, Valsad, Narmada and Vadodara districts were relocated by the administration; out of which 6,853 have returned home while approximately 3,821 are at the shelter homes provided by the government.

Addressing a press conference, Trivedi said that a red alert has been issued for heavy rains in Bharuch, Chhotaudepur, Narmada, Surat, Tapi, Dang, Navsari and Valsad districts in the state. A total of 18 teams of NDRF and SDRF are deployed for rescue operations in the rain-hit districts.

Adequate food and water facilities are being provided to affected residents by the administration. An estimated 508 civilians have so far been successfully rescued from five districts amid heavy rainfall.

A total of 25 houses and 11 huts have been damaged since June 1, the minister said, adding that an estimated 272 cattle have died in the state so far.

Notably, more than nine districts in Gujarat have been witnessing heavy rains for the last 48 hours, affecting almost everyone from these districts. Many people have lost their homes and belongings.

Prime Minister Narendra Modi on Monday called Chief Minister Bhupendra Patel to take stock of the situation in the state. The Prime Minister has assured all necessary help, including the NDRF deployment in the rain affected regions of the state.

Chief Secretary Pankaj Kumar, during discussions with officials of Bharuch, Tapi, Narmada, Surat, Valsad, Dang and Chhotaudepur districts, has instructed officials to carry out relief operations with an approach of zero casualty.

Health Minister and Minister in charge of Ahmedabad Hrishikesh Patel visited various places in Ahmedabad and assessed the situation.