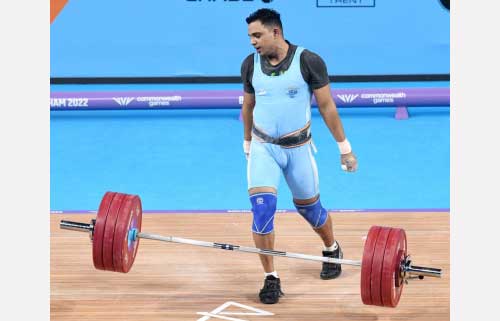 Indian weightlifter Ajay Singh fought hard to grab another medal for India in 2022 Commonwealth Games, but he heartbreakingly missed out on a podium finish by just one kg to be at fourth place in the men’s 81kg competition on Monday.

In a thrilling final which went down the wire at the National Exhibition Centre, Ajay had nailed every lift of his in the competition. But he was unable to lift 180kg in his final attempt of clean and jerk to narrowly miss out on a medal, ending with a total of 319kg (146kg in snatch and 176kg in clean & jerk) in a case of so close yet so far.

Ajay had won the 2021 Commonwealth Championships with a total of 322kg (147kg in snatch and 175kg in clean & jerk) and earned direct qualification for the Commonwealth Games.

He began by just about to manage lifting 137 kgs in his first attempt of snatch. He nearly stumbled off the platform but held on to his lift successfully. Ajay went for 140 kgs in his second snatch attempt and comfortably succeeded in lifting the weight.

Ajay then nailed his third snatch attempt by successfully lifting 143 kgs to be joint-second best with Australia’s Kyle Bruce and one kg behind England’s Chris Murray sitting on top of the table with the best lift of 144kg in snatch.

Battling hard for breaking into top three medal spots, Ajay tried to lift 180kg in his final attempt. But despite taking time and adjusting the grip twice, Ajay failed to successfully complete the lift, finishing at fourth place and was out of medal contention.

The final took a dramatic turn after Murray lifted 181kg in his final attempt of clean and jerk to set a Games record total of 325kg. Bruce went for a lift of 183kg on his final attempt and did it. But the jury found an issue with his jerk attempt, possibly about his left arm becoming unlocked.

Australia appealed, but couldn’t change the jury’s decision of no-lift and Bruce finished with 323kg. Vachon tried to displace Murray with an attempted lift of 187 kg, but dropped the barbell and settled for a bronze medal, ending a rollicking final.