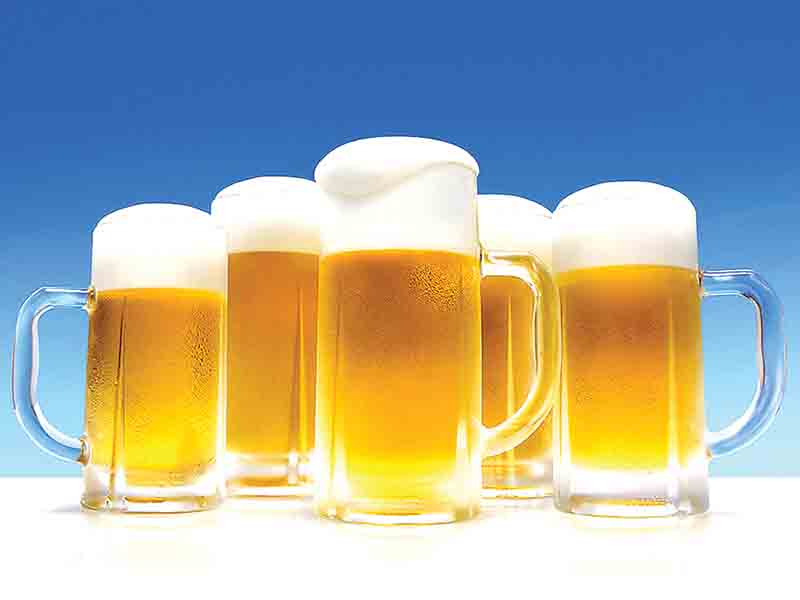 Putting a new spin on the term “beer gut,” a small study suggests that a bottle a day may do a man’s gut bacteria some good.
In a clinical trial of 19 healthy men, researchers found that a daily bottle of beer — alcoholic or non-alcoholic — changed the composition of the men’s gut bacteria over four weeks. Specifically, either type of beer boosted the diversity in their gut microbes.
In general, greater diversity in gut bacteria is considered better than less diversity. Experts cautioned, however, that it’s unclear whether people would gain any health benefits from the gut changes seen in this short-term trial.
“We have a lot left to learn about what defines a healthy balance of gut bacteria,” said Lauri Wright, chairwoman of nutrition and dietetics at the University of North Florida in Jacksonville.
Wright, who is also a spokeswoman for the Academy of Nutrition and Dietetics, was not involved in the study. She said it’s always useful to have research that tries to observe the effects of a food on the human body.
But in the real world, it’s overall diet that matters. And there is more to any food, or beverage, than its effects on gut microbes, Wright said.
She recommended focusing on general diet quality instead: Limit highly processed products and get plenty of nutrient-rich whole foods — including fruits and vegetables — rather than a daily beer.
The study, published June 15 in the Journal of Agricultural and Food Chemistry, is one of the latest to delve into the hot topic of the gut microbiome.
The term refers to the vast collection of bacteria and other microorganisms that naturally dwell in the gut. Research in recent years has revealed just how important those microbes are to the body’s normal processes — from metabolism to immune defenses to brain function.
Makeup of the gut microbiome is influenced by many factors, including genes, health conditions, stress and medication use (particularly antibiotics). But research shows diet is a key player.
Past studies have found that diets rich in vegetables, beans, grains, nuts and fish — like the famous Mediterranean diet — may boost gut microbe diversity. There is also evidence that fermented foods, like yogurt and kimchi, can do the same.
For the new trial, Portuguese researchers wanted to test the effects of beer, which is a fermented extract of malted barley grains.
Beer also contains numerous plant compounds, called polyphenols, that may affect gut microbes, according to the researchers, who were led by Ana Faria of NOVA University Lisbon.
Faria’s team recruited 19 healthy men who were moderate drinkers and randomly assigned them to one of two groups. One group drank a bottle of lager beer with dinner every night for four weeks; the other drank a non-alcoholic version. Both groups were instructed to keep up their normal eating and exercise habits.
Before and after that four-week period, the men provided stool samples for an analysis of their gut bacteria.
Overall, the investigators found, both groups showed an increase in their microbe diversity, along with revved up activity in fecal alkaline phosphatase. The researchers said that can be an indicator of better intestinal function.
But a microbiome expert not involved in the study said the findings are “not very convincing.”
“This is a small study looking at the composition of gut microbes at the genus level,” said Dr. Emeran Mayer of the UCLA Brain Gut Microbiome Center in Los Angeles. It did not look at measures of microbiome function, he added.
That is not to dismiss the potential for beer to support a healthier gut. Mayer noted that consumption of hops, a plant used in beer brewing for aroma and bitterness, has been linked to health benefits. So it would be interesting, he said, for studies to look at whether microbiome changes are one mechanism.
However, Mayer agreed that a healthy diet is the way to go. Trying to derive health benefits from a bottle of beer “is not a good idea,” he said. Even if non-alcoholic beer has the potential to boost gut microbe diversity, Mayer worried that people would still “use it as an excuse to drink regular beer.”
“In general,” he said, “a diet rich in a large variety of plant-based foods and naturally fermented products is the best way to increase gut microbial diversity.”
By Amy Norton HealthDay Reporter

Romelu Lukaku returns to InterMilan on season-long loan from Chelsea

Sikkim govt bans use of glue traps for rodent control