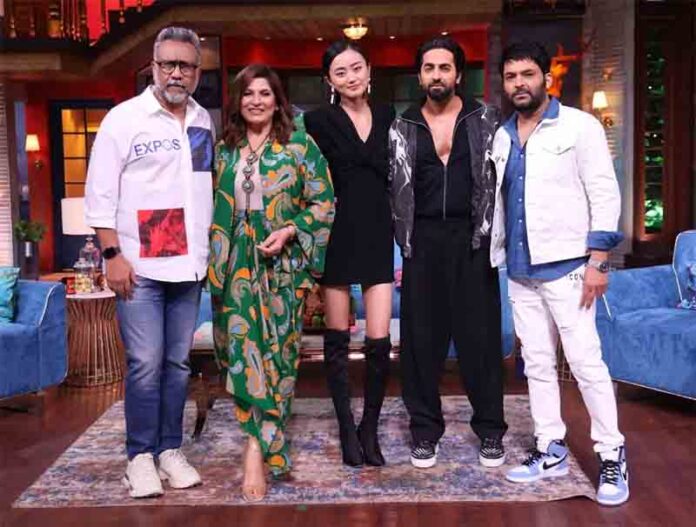 Mainstream actors in Bollywood have welcomed Andrea Kevichusa who’s playing the lead opposite Ayushmann in Anubhav Sinha’s ‘Anek’.
Supermodel Andrea Kevichusa from Nagaland is the latest sensation from the North East. Andrea is the typical small-town girl all set to make the leap into Bollywood.
The actress had commenced her journey to be the next big thing when she was scouted at the age of 15. And since then, the talented Andrea has never looked back.
Welcoming the debutante, several Indian actresses including Tapsee Pannu, Bhumi Pednekar, Kriti Sanon, Aditi Rao Hydari, Dia Mirza, Neena Gupta, and Huma Qureshi came forward with open arms, accepting diversity in uniformity.
On Andrea and her performance in the film, ‘Anek’ director Anubhav Sinha says “There couldn’t be a better choice for the lead role in ‘Anek’ than Andrea. Her northeastern roots have added originality to the story. Apart from that, Andrea has lost a lot of sweat for this character. Her tough looks and phenomenal acting has helped her embody the character well”
Andrea, is playing the role of a boxer named AIDO in ‘Anek’.
Talking about her experience of working with Ayushmann and Anubhav Sinha, Andrea says, “ When it finally dawned on me that I would be working with creatives that are such big names in the industry, I think I just scared myself into thinking I wouldn’t be able to deliver as well as they had expected me to.
“But Ayushmann and Anubhav Sir created such a comfortable environment for me on set that I felt no added pressure to over-perform or do anything that was beyond my capabilities being a newcomer in this field.”
For the first time, Ayushmann Khurrana will be seen essaying the role of an undercover officer while the leading lady Andrea will be seen slipping into the role of a national-level boxer named AIDO in ‘Anek’.
Andrea, who is proud of her Naga roots believes that her uniqueness has set her apart from other models. Her extraordinary yet sharp lineaments have helped her garner attention from major global brands and are one of the reasons why she enjoyed a successful modelling career.
Starring Ayushmann Khurrana and Andrea Kevichusa in the lead, ‘Anek’ is jointly produced by Bhushan Kumar’s T-Series and Benaras Mediaworks. The film is all set to release on May 27.

Popular film director Anubhav Sinha spills the beans on his inspiration behind his latest film ‘Anek’ and how it has a connection to the beautiful state of Nagaland.
He is appearing as a special guest to promote his film ‘Anek’ on ‘The Kapil Sharma Show’.
The director is accompanied by lead stars of the movie Ayushmann Khurrana and Andrea Kevichusa.
He says: “The genesis of the film began with my teacher, who used to teach me Tai-Chi, which is a little different from Yoga. He is from Nagaland; Deepak Das is his name. A lot of times, I used to ask him, ‘where are you from?’, ‘what is your culture like? the food you eat?’ among other things.”
“During those conversations, every morning when we were working out, I got the spark, which then went to the film. I did not know much about this region as Ayushmann rightly said. I did not know about the Northeast’s seven states.”
“I then got into it and started flipping through books as well as people. I had a lot of conversations with different people. There are not a lot of films or documentaries about the subject only articles,” he adds. The director then spoke about the difficulties he faced in the making of the film.
“I faced many difficulties making the film because I had to do academic research for this. It took me a year only to study the subject I was making the film with big books,” he concludes.
‘The Kapil Sharma Show’ airs on Sony Entertainment Television.