Britons to stand trial in proxy court in Ukraine 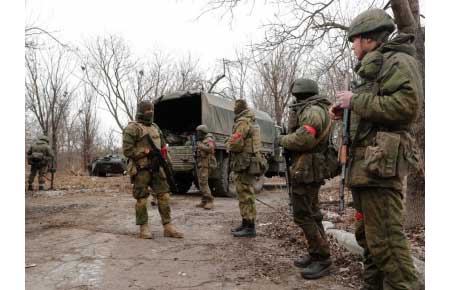 Three Britons held by rebels in Ukraine and accused of being mercenaries will stand trial in the separatist Donetsk People’s Republic, media reports said.

According to Russia’s TASS News Agency, John Harding, Dylan Healy, and Andrew Hill were members of Ukraine’s Azov Battalion and captured in Mariupol.

On Monday, the Supreme Court of the Donetsk People’s Republic said it will review a criminal case against the three Britons, as well as two other men from Sweden and Croatia.

The court however did not mention the date of a hearing and said that the format of hearings were yet to be determined.

The breakaway region’s Prosecutor General’s Office said the Britons have “refused to cooperate with investigators and testify”, while the Swedish citizen has “rejected the accusations of fighting for the Ukrainian army as a mercenary”, reports TASS News Agency.

The same court in June had sentenced two British nationals, Shaun Pinner and Aiden Aslin, as well as Moroccan Brahim Saadoun, captured in Donbas, to death.

Condemning Monday’s development, the British Foreign Office said it was in constant contact with Ukraine to support its efforts to get all the Britons released, the BBC reported.

“We condemn the exploitation of prisoners of war and civilian detainees for political purposes and have raised this with Russia.”

While Harding, a former serviceman originally from Sunderland, had fought alongside Ukrainian forces since moving to the country in 2018, Hill has been fighting with Kiev’s International Legion.

Meanwhile, Healy had been volunteering in Ukraine as an aid worker when he was captured at a checkpoint in April, alongside Paul Urey who died in July while being held by Russian-backed separatists, reports the BBC.