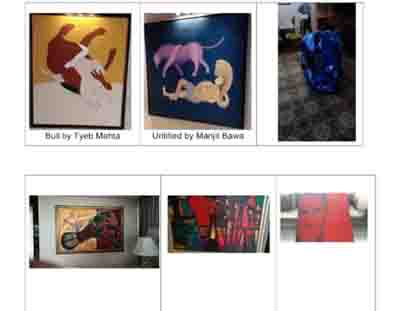 The Central Bureau of Investigation (CBI) on Friday conducted searches in connection with the Rs 36,615 crore loan fraud case involving DHFL and its top officials, which led to the recovery of a large number of valuable paintings and sculptures estimated to be worth around Rs 40 crore.

“The premises of Rebecca Dewan and Ajay Ramesh Nawandar in Mumbai and Mahabaleshwar, respectively, were raided by our team,” said a CBI official.

A CBI source said that a person named Vipin Kumar Shukla, DGM and head of Union Bank of India’s Nariman Point branch, had lodged an FIR in this connection.

It was alleged that Dewan Housing Finance Corporation Ltd (DHFL), its former CMD Kapil Wadhawan, ex-Director Dheeraj Wadhawan, and other accused persons entered into a criminal conspiracy to cheat a consortium of 17 banks led by the Union Bank of India.

“The Wadhawans and others induced the consortium banks to sanction huge loans aggregating to Rs 42,871.42 crore and siphoned off and misappropriated a significant portion of the said funds by falsifying the books of the DHFL and dishonestly defaulted on repayment of the legitimate dues of the said consortium banks. They caused a wrongful loss of Rs 34,615.00 crore to the consortium lenders,” said the CBI.

The official said that it was found that the promoters had allegedly diverted the funds and made investments in various entities.

It was also alleged that the promoters had acquired expensive paintings and sculptures worth about Rs 55 crore using the diverted funds.

Earlier on June 22, searches were conducted at 12 locations in Mumbai at the premises of the accused persons which led to the recovery of incriminating documents.