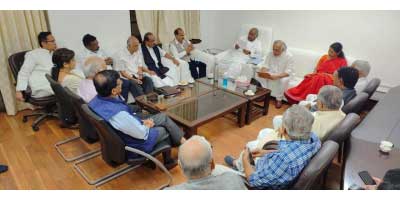 The opposition parties met in Parliament on Thursday on the issue of misuse of agencies and later issued a joint statement.

The statement said, “Modi Sarkar has unleashed a relentless campaign of vendetta against its political opponents and critics through the mischievous misuse of investigative agencies. Prominent leaders of a number of political parties have been deliberately targeted and subjected to harassment in an unprecedented manner.

“We condemn this and resolve to continue and intensify our collective fight against the anti-people, anti-farmer, anti-Constitution policies of the Modi Sarkar that is destroying the social fabric of our society.”

The eleven parties that attended the meeting at the Leader of Opposition’s office in the Parliament premises include: DMK, CPI-M, CPI, IUML, National Conference, TRS, MDMK, NCP, VCK, Shiv Sena and the Rashtriya Janata Dal.

The meeting happened on the morning of the day when Congress interim President Sonia Gandhi is scheduled to appear before the Enforcement Directorate in the National Herald case.

The Congress MPs also moved adjournment notices in both Houses of Parliament over the ‘misuse of agencies against the opponents’.

In Lok Sabha, the notice was given by Gaurav Gogoi and Manickam Tagore.

Congress MP K.C. Venugopal gave a suspension of business notice in the Rajya Sabha, citing the “misuse of central agencies in the country which includes the ED, CBI and I-T department to target political leaders by the ruling party.”