Challenge of bio-diversity in Nagaland 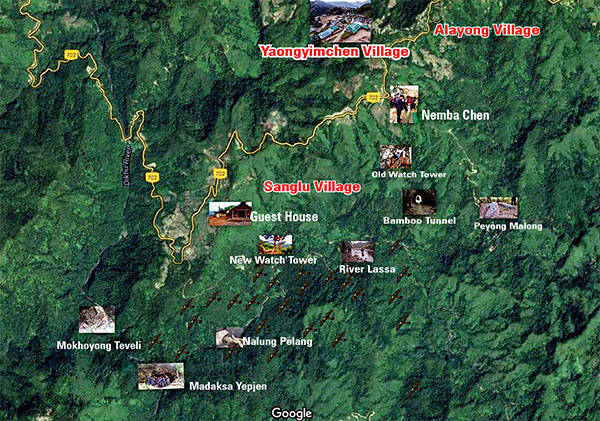 Decades of wanton plunder of forest in Nagaland has caused immense damage to the ecology and environment and extinction of rare flora and fauna.

The loss of verdant forests such as the erstwhile Rangapahar Reserve Sanctuary to constant illegal felling of valuable trees and successive encroachments has reduced the once lush and natural forest from around 21,000 Acres to hardly 300 Acres today.

Article 371A that guarantees the ownership of land on the people and not to the government, is an issue that has not facilitated protection and promotion of biodiversity.

In the midst of all, several communities have come up to promote Community Conserved Areas (CCAs), to respond to the need for sustainability.

Success stories of Lemsachenlok in Longleng district, a nature biodiversity group formed by churchman Y. Nuklu Phom is a notable example of persistence against all odds.

Phom had won two Awards – the prestigious Whitley Award in May this year for his work for Amur Falcons and earlier India Biodiversity Award in 2018. The other notable success story of conservation has been the The Khonoma Nature Conservation & Tragopan Sanctuary (KNCTS) which was awarded the prestigious India Biodiversity Awards 2021 under the category “Sustainable Use of Biological Resources.” KNCTS had also won the award in 2018.

Traditional wildlife hunting is the bane of protection of wildlife in Nagaland: State’s Chief Wildlife Warden, Vedpal Singh told Nagaland Post that traditional practice of hunting wild life remains a big hurdle towards promoting biodiversity. He believes that Wildlife Laws have made hunting illegal to benefit people but it needs to be followed up with community participation.

When it was pointed out that hunting was a traditional activity as source of food, Singh said this can be substituted by promoting piggery, poultry etc.

Meanwhile, when asked to comment on issues concerning biodiversity in Nagaland, Siddharth Edake, a Fellow and area convenor of the Centre for Biodiversity and Ecosystems Services (CBES) at The Energy and Resources Institute (TERI), New Delhi, said that when the Nagaland forest department invited TERI to do a state wide survey of CCAs in the state, the team found that Nagaland had 407 CCAs and that almost one third of them were active.

It may be mentioned here that many more CCAs may have been established today, as the study was conducted in 2014 to 2015.

During this documentation, Siddharth learnt that the major challenge was that the CCAs were not recognised by the central and state government and because of this they had “no financial support or legal recognition”.

He said that the people were conserving good patches of land that they could otherwise use for timber purpose as and get joint financial benefits but they had chosen not to and instead conserve the lands. “We prepared a policy to recognise these CCAs and tried to push it so that the government of India recognises them but somehow it did not move forward which was very unfortunate”, he lamented.

He disclosed that the forest department also tried its best to push this policy which was cleared by the state government. However, he said it “got stuck” at the MoEFCC (Ministry of Environment Forest and Climate Change).

During the documentation at Sukhai, Ghukhuyi and Kivikhu under Zunheboto district as pilot sites Siddharth said after intense engagement with communities, the three villages formally declared a total of 939 hectares of biodiversity rich forest as CCAs in respective villages.

He said that there were no problem educating villagers on the importance of conservation but that during the last elections, hunting activity became active at that time.

He said poachers were mainly from the rich and affluent sections from Dimapur, Kohima and other big towns.

Siddarth felt that ecotourism was the only genuine potential for economic transformation in Nagaland. “The only area where we struggle is the condition of roads and if this issue is resolved then I feel ecotourism will be harnessed” he said.

He also shared that during the documentation in Zunheboto, what was found was that Nagaland needed more “green champions or green warriors”.

He also said despite all the talks of conservation, what was lacking was the political will to carry forward the plans.

“It’s a green state and there is amazing biodiversity but a lot of people have not recognised it at the highest level,” he said.

Siddarth said he also found that in Nagaland, communities in general, took huge pride when their efforts were recognised.

“Once the government recognises the works and start giving some financial help to the locals, it would really help to push the movement in the right direction”, Siddharth stated.

Meanwhile, speaking to Nagaland Post, Y. Nuklu Phom, who was among the six the winners for the prestigious “Whitley Awards 2021” and known as the Amur falcon man of Nagaland said that the government should be sensitive to issues pertaining to the biodiversity and must ensure that the funds are not lacking.

“Whatever agendas and projects the responsible department brings, the government must do all it can to execute them and generously support the plans,” he said.

He opined that rural communities were more informed than urban dwellers about how use of pesticides for crops had caused water bodies dry up and plant species dying and leading to deforestation.

In order to provide sustenance for food, Nuklu said communities require support in various forms such as ecotourism, livelihoods, etc, from the government. He said there was need to recognise these efforts to ensure sustainability.

It may be mentioned that Nuklu founded Lemsachenlok, an initiative to protect the biodiversity of his ancestral village, Yaongyimchen. Lemsachenlok has been conserving the forests since 2007.

Ever since this mission, roosting Amur Falcons have increased from 50, 000 to one million, making it one of the most successful conservation projects in the North East.

Today, Nuklu is working on creating a network of community reserves to form a biodiversity peace corridor uniting 16 villages.

Many of these stories involve cooperation and by working together, we make real progress towards a more sustainable future, and there may not be much time, but there is hope.

It remains to be seen whether the state government would reinforce stringent measures to protect the biodiversity or watch the state’s biodiversity slowly decline.