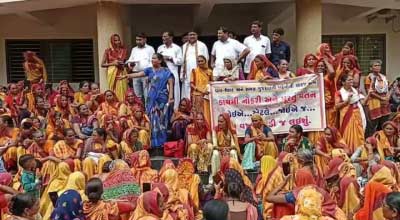 Congress MLA from Vav constituency Geniben Thakor on Friday threatened to chop off police personnel’s fingers, if they dared to harass or detain the agitating Anganwadi workers.

Since the last two to three weeks, anganwadi workers have been protesting across the state demanding regularisation of their jobs. They are only paid Rs 7,000 honorarium per month, said the MLA.

Speaking to IANS, Geniben pointed out, “On Thursday, I visited anganwadi workers protesting seeking regularisation of their jobs. There, I warned the police that I would chop off their fingers if they harassed or detained workers under political pressure. The workers have a right to demand a pay hike.

She alleged that the police is least bothered about real law and order issues but it protects the political interest of the ruling party and crushes any agitation by citizens or government employees.