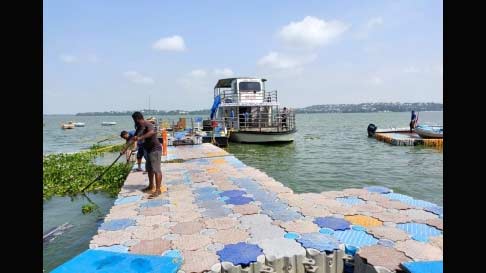 ‘Lake Princess’, the cruise boat that partly got submerged at Bhopal’s upper lake due to strong winds and heavy rainfall, has been pulled out.

“The two-storey cruise is being repaired as glass and wooden parts were badly damaged. It will take some time to make it operational again,” a tourism official, who was present at the spot, told IANS on Saturday.

An engineer said that parts of the cruise are being opened and then damage will be assessed.

“It will take at least one month to repair this cruise and make it operational once again,” a Hyderabad-based engineer said, adding that heavy flow of wind made the cruise uneven due to which portion of it submerged into water.

Though there are several paddle and electric boats for tourists visiting upper lake, this cruise is the prime attraction.

It carries at least 70-80 tourists in one go and takes a round of entire upper lake.

The ride becomes more enjoying for tourists in the cruise as they can have coffee, beer, snacks along with music and dance on it.