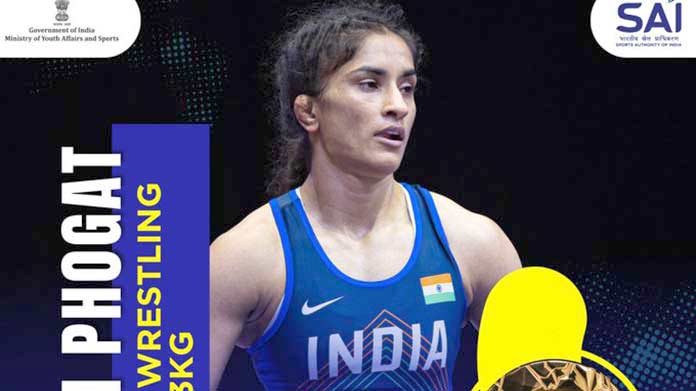 Indian wrestler Vinesh Phogat won gold medal at the 2022 Commonwealth Games in the women’s 53kg event and completed the hat-trick of top podium finishes, here on Saturday.
This was after Tokyo Olympics silver medallist Ravi Kumar Dahiya bagged a gold medal by thrashing his Nigerian opponent Welson Ebikewenimo 10-0 on points in the Men’s Freestyle 57 kg final.
The 27-year-old Vinesh entered Birmingham 2022 as a two-time champion and ensured her third straight CWG gold after going undefeated. She had won the 48kg gold at Glasgow 2014 and the 50kg division at Gold Coast 2018.
With only four wrestlers in the women’s 53kg division at Birmingham, the medals were decided through a single-phase Nordic Group system, in which all the wrestlers faced each other once. The group topper after the sequence of matches won the gold while the second and third placed grapplers took silver and bronze, respectively.
World championships 2021 bronze medallist Samantha Stewart, Nigeria’s Mercy Bolafunoluwa Adekuoroye and Sri Lanka’s Chamodya Keshani Maduravalage Don were the other wrestlers competed in the division.
Mercy is the younger sister of three-time Commonwealth Games champion Odunayo Adekuoroye, who beat Vinesh’s compatriot Anshu Malik on Friday to pocket the women’s 57kg gold. In her first bout against Samantha Stewart, Vinesh caught the Canadian in a headlock and converted it to a pin to win the match by fall. The bout lasted around 30 seconds. The second bout against Adekuoroye saw the Indian on the mat for the full six minutes to eke out a 6-0 win. The victory meant the Indian grappler already had one hand on the gold medal.
In what was a matter of formality, Vinesh completed the clean sweep, beating Chamodya Keshani Maduravalage Don by fall to end the tournament with a flawless record.
The medal comes as a huge booster for the Indian wrestler, who had a disappointing outing at the Tokyo Olympics and crashed out in the quarter-finals. She has been struggling with form and fitness since then.
Samantha Stewart bagged the bronze medal after beating Mercy in the final second of their bout, which decided the silver medal. Dahiya, a three-time Asian champion and a bronze medallist in World Championship, started cautiously as he tested his opponent’s strength, Both the players failed to score any points in the first minute and the Nigerian went on the attack, trying to catch Dahiya by his leg. However the Indian boxer easily thwarted his effort.
The Nigerian made another attack but was thwarted again. At this juncture, Dahiya was warned by the referee for being too passive and defensive and that seems to have triggered some wire in the 24-year-old India’s mind, Dahiya launched a series of superb attacks and earned eight points in a row. He got the Nigerian in a leg-attack twice and then forced a takedown again.
The Indian wrapped up the bout with another takedown that earned him two more points. Dahiya went on to win the bout 10-0 and claimed his maiden gold medal in the Commonwealth Games.
The 24-year-old wrestler from the village Nahri in Sonipat district, Haryana, will now be preparing for the upcoming world championships next month and will be hoping to add to the bronze he won in Nur Sultan in 2019.