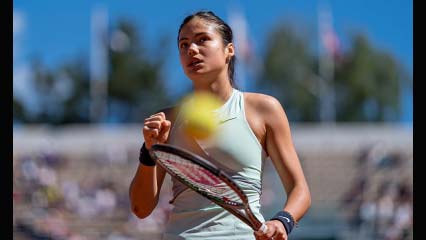 In her record-breaking 63rd consecutive major appearance, Alize Cornet of France hogged the limelight, ending Raducanu’s title defence inside the Louis Armstrong Stadium 3-6, 3-6. Raducanu, who had soared into the top-10 of the WTA rankings in July, will soon drop to outside the top-75 following her first-round exit.

American 19th seed Danielle Collins, who had not played since July, was back to her best in her 7-6(5), 6-3 first-round win against two-time champion Osaka, displaying breath-taking baseline strokes.

The Australian Open finalist, who earned her maiden win in four attempts against Osaka, will face Spain’s Cristina Bucsa in the next round.

Raducanu had her serve broken three times in the first set, the last time due to a double fault. It was 3-all in the second when Cornet hit a superb half-volley winner on the way to her sixth break of Raducanu’s serve. A seventh break was just enough to get Cornet a spot in the second round.

“My game at the net was pretty good,” Cornet was quoted as saying by wtatennis.com. “I did a lot of variation — I think that’s what worked tonight.”

The 32-year-old Cornet, ranked No.37, has five top-20 wins this season, including the upset of No.1 Iga Swiatek at Wimbledon and a win against Romania’s Simona Halep in Melbourne.

“I think I’m handling my emotions better,” Cornet said. “I guess I’m getting old — more mature. It shows in my results. I’m 32 — better late than never.”

Cornet is appearing in her 63rd consecutive Grand Slam main draw, the longest run in the Open Era. She will play Katerina Siniakova of the Czech Republic in the second round.

“I saw that I’ve beaten a Grand Slam champion on every Slam this year,” Cornet said. “I think it’s crazy. It’s kind of cool. These players that I’m admiring, that I have been following for a long time, knowing I’m part of this world, that I can beat them on a Slam, I don’t know, I still feel like a kid sometimes.”

Meanwhile, Australian Open finalist Danielle Collins said after defeating Osaka that she had learnt a lot about her opponent’s game after losing in the last three encounters against the Japanese.

“When you lose to someone three times you get a lot of information on what you can do better,” Collins said. “With Naomi being the player that she is, she definitely whooped me the last time. I just had to learn from that and make adjustments and I think I did that.”