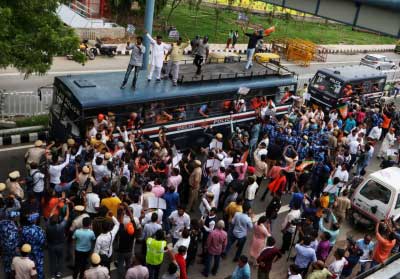 Bharatiya Janata Party (BJP) workers on Saturday took to the streets of the national capital protesting against the Delhi government’s new excise policy.

There was heavy deployment of police personnel and para-military force to prevent any untoward incident. The police had placed barricades on the road to prevent the protesters from moving towards Sisodia’s residence.

But as the BJP workers trampled across the barricades and tried to cross it, they were subsequently detained by the police.

“Delhi government should immediately sack Manish Sisodia as he has connived with the liquor mafia to bring this new corrupt liquor policy,” one of the leaders, who was being detained, said.

On Friday, Delhi Lieutenant Governor V.K. Saxena recommended a CBI inquiry after a recent report by the Chief Secretary established violations of the Delhi Excise Act 2009.

He alleged that Sisodia was providing undue benefits to liquor licensees.

It has also been alleged that AAP may have used this money during the Punjab elections.

However, responding to the CBI probe, AAP leader Saurabh Bharadwaj said that Kejriwal’s “growing reputation across the country, even in panchayat elections has threatened the Centre”.

“We’d been saying, especially after the Punjab win, that the BJP central govt is scared of us. Several inquiries will be launched in days to come,” he said.

Kejriwal too came in his Deputy Chief Minister’s defence, saying that BJP is scared of the party’s expansion in the country.

Accusing the LG of making ‘false allegations’, he said: “You arrested Satyendar Jain who was working in the health sector and now wants to put Sisodia, who is making careers and lives of lakhs of children in Delhi, behind bars.”