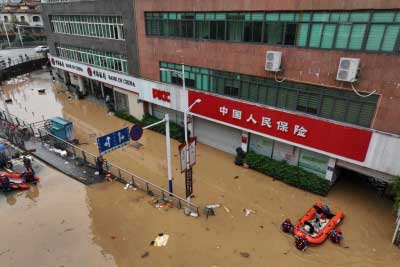 Since summer began, scenes of devastation and misery have been playing out across China as the world’s most populous nation grapples with an unrelenting torrent of extreme weather emergencies, local media reported.

Scientists have been warning for years that the climate crisis would amplify extreme weather, making it deadlier and more frequent. Now, like much of the world, China is reeling from its impact, CNN reported.

Since the country’s rainy season started in May, heavy rainstorms have brought severe flooding and landslides to large swathes of southern China, killing dozens of people, displacing millions and causing economic losses running into billions of yuan.

That heat wave has now engulfed half the country, affecting more than 900 million people — or about 64% of the population. All but two northeastern provinces in China have issued high-temperature warnings, with 84 cities issuing their highest-level red alerts last Wednesday.

In recent weeks, a total of 71 national weather stations across China have logged temperatures that smashed records. Four cities — three in the central province of Hebei and one in Yunnan in the southwest — saw temperatures reaching 44 degrees Celsius, according to the National Climate Center, CNN reported.

The stifling heat has coincided with a surge in Covid cases, making government mandated mass testing all the more excruciating for residents — including the elderly — who must wait in long lines under the sun. It has also become a dangerous task for health workers who, as part of the government’s zero-Covid policy, are required to spend long hours outdoors covered head to toe in airtight PPE equipment as they administer the tests.

Several videos of Covid workers collapsing on the ground from heatstroke have gone viral on social media, CNN reported.

The heat wave has also caused power shortages in some regions and hit the country’s crop production, threatening to further push up food prices.

And the worst might be still to come, according to Yao Wenguang, a Ministry of Water Resources official overseeing flood and drought prevention.