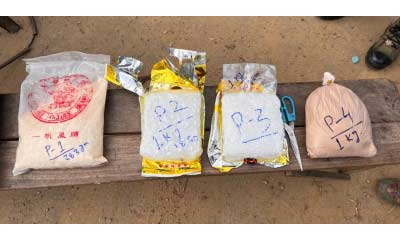 Smuggling of drugs from Myanmar continues unabated in northeast India with drugs, valued at Rs 15 crore, being seized by Assam Police and three persons were arrested in this connection on Tuesday, officials said.

Three drug peddlers were held at Dillai in Karbi Anglong district when they were coming from Manipur and heading towards West Bengal’s Siliguri in a vehicle.

A police official said that after a search of the vehicle, 383 gm of heroin, one kg of morphine and two kg crystal methamphetamine and Syabu recovered from the car and the value of this contraband have been estimated to be around Rs 15 crore in the international market.

The official said that the drugs were smuggled from Myanmar, which shares an unfenced border with Manipur, Mizoram, Nagaland, and Arunachal Pradesh.

According to security and intelligence officials, apart from varied illicit drugs, especially heroin, methamphetamine tablets or ‘Yaba’, poppy seeds, opium, ganja, morphine, bottles of cough syrup, other contraband like gold, as well as arms and ammunition are smuggled to other parts of India and neighbouring countries including Bangladesh, Sri Lanka, and Pakistan.

56 under trial prisoners released in Nagaland