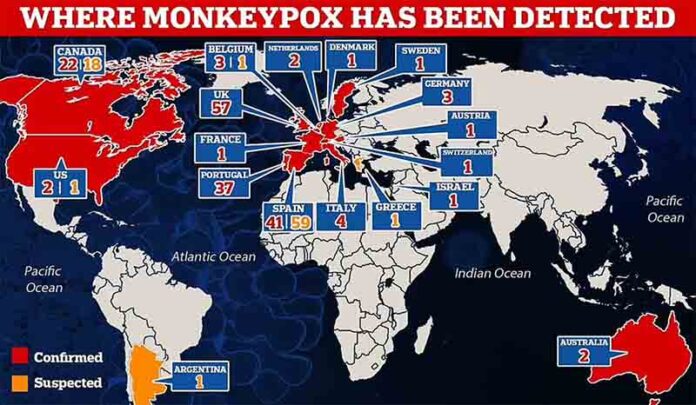 As Denmark becomes the latest country to be struck down by monkeypox, EU authorities are set to publish a risk assessment, wherein all European countries will be told to prepare a vaccination strategy to tackle the spiralling outbreak.
While no monkeypox-specific vaccine exists, the smallpox jabs that were routinely offered to Brits until the virus was eradicated four decades ago remain 85% effective against monkeypox, the Daily Mail reported.
The strategy likely to be recommended is the same already deployed in Britain, where officials are attempting to contain the spread by vaccinating all close contacts of the 20 confirmed monkeypox cases, including NHS workers.
This strategy, called ring vaccination, involves jabbing and monitoring anyone around an infected person to form a buffer of immune people to limit the disease’s spread. It comes as experts warn nations could bring in travel restrictions to control the spread of the illness, if the World Health Organisation (WHO) declares the outbreak an emergency.
But the vaccine, called Imvanex and made by Denmark-based drugmaker Bavarian Nordic, has not been authorised for use against monkeypox in Europe or the UK. The European Medicines Agency approved the jab for use against smallpox in 2013, while the US Food and Drug Administration greenlit the injection for both infections in 2019. And there is no data available on how safe it is for immunocompromised people or youngsters — the groups at highest risk from the outbreak.
India to screen passengers: With cases of monkeypox popping up in several countries, India has issued alerts to all airports in the country to screen international passengers arriving into India. The instructions were issued after several countries, including from Europe, Africa, Americas and Australia, reported confirmed or suspected cases of monkeypox.
The government said airports with international air traffic should immediately reactivate their surveillance systems, check incoming passengers, particularly those from countries that have reported monkeypox cases. However, there have been no such cases in India.
The Mumbai civic body has kept a 28-bed ward ready at the Kasturba Hospital here for the isolation of suspected patients, officials said on Monday.
Monkeypox transmission can be stopped: The monkeypox outbreaks in non-endemic countries can be contained and human-to-human transmission of the virus stopped, the World Health Organization said Monday.
Fewer than 200 confirmed and suspected cases had been recorded so far, the WHO’s emerging disease lead Maria Van Kerkhove said.
“This is a containable situation, particularly in the countries where we are seeing these outbreaks that are happening across Europe, in North America as well,” Van Kerkhove told a live interaction on the UN health agency’s social media channels. “We want to stop human-to-human transmission. We can do this in non-endemic countries.”
She added, “We’re in a situation where we can use public health tools of early identification, supported isolation of cases. We can stop human-to-human transmission.” The disease is considered endemic in 11 African nations.
Kerkhove said transmission was happening via “close physical contact: skin-to-skin contact”, and that most of the people identified so far had not had a severe case of the disease.
Rosamund Lewis, who heads the smallpox secretariat on the WHO emergencies programme, said monkeypox had been known for at least 40 years and a few cases had appeared in Europe over the last five years in travellers from the endemic regions. However, “this is the first time we’re seeing cases across many countries at the same time and people who have not travelled to the endemic regions in Africa”, she said.
Symptoms: Monkeypox symptoms include fever, muscle aches, swollen lymph nodes, chills, exhaustion and a chickenpox-like rash on the hands and face. No treatment exists, but the symptoms usually clear up after two to four weeks.
Treatment: As far as the treatment is concerned, it doesn’t exist, but the symptoms usually clear up after two to four weeks. The disease is considered endemic in 11 African nations.
There are antiviral drugs for smallpox that could also be used to treat monkeypox under certain circumstances, a spokesperson for the U.S. Department of Health and Human Services said in a statement.
More broadly, health officials say that people should avoid close personal contact with someone who has a rash illness or who is otherwise unwell. People who suspect they have monkeypox should isolate and seek medical care.