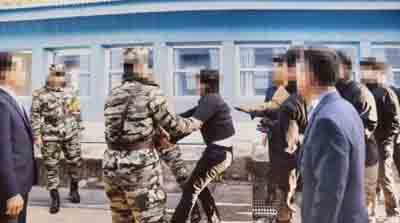 Chung made the remark in a statement issued via Rep. Yoon Kun-young of the main opposition Democratic Party, stressing that South Korea first asked the North if it was willing to accept the two fishermen before deporting them.

The statement came after a newspaper report alleged that the North informed the then presidential office, Cheong Wa Dae, that a fishing boat carrying North Koreans was heading to South Korea and the notification could be seen as an order for the South to capture and repatriate them.

“No request was received from North Korea that the brutal criminals be repatriated,” Yonhap news agency reported quoting Chung’s statement.

“But we sounded out North Korea’s intentions because we need to check the willingness of the counterpart nation first in case of deportation.”

Chung served as the chief of the presidential National Security Office at the time.

In 2019, the North Koreans were captured near the sea border in the East Sea. They confessed to killing 16 fellow crew members and expressed a desire to defect to South Korea, but the then Moon Jae-in government deemed their intentions to be insincere and sent them back to the North.

The repatriation is one of the suspicious cases involving the former administration that President Yoon Suk-yeol’s government is revisiting, along with the North’s killing of a South Korean fisheries official near the western sea border in 2020.

Criticism of the repatriation escalated last week after the unification ministry released 10 photos of the North Koreans being dragged across the inter-Korean border and handed over to the North, apparently against their will.

Critics have accused the then Moon administration of sending them back to their homeland in an effort to curry favor with Pyongyang so as to help move the stalled inter-Korean peace process forward.

Chung also dismissed as “extremely absurd” allegations that the Moon government deported them to create a favorable atmosphere for inviting North Korean leader Kim Jong-un to a special summit between South Korea and the Association of Southeast Asian Nations (ASEAN).

“The government determined that in consideration of the timing and method of their expression of a desire to defect, their intentions were insincere,” Chung said. “By any means, we could not view it as a normal course of defection.”

Chung said the fishermen were not “simple murderers who killed one person or two, but they were rare, grotesque killers.”

“Some claim that we had to accept them into our society as defectors in accordance with our Constitution,” he said. “However, our domestic law stipulates that nonpolitical criminals like them should be deported without being allowed into the country. Nonpolitical serious criminals are also not considered refugees under the international law.”