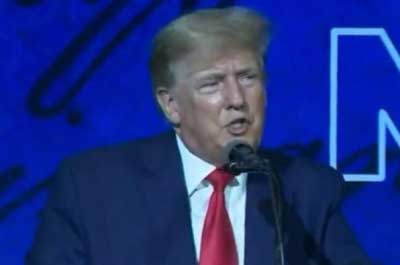 The much-awaited Thursday’s testimonies of former Trump’ press aide Sarah Matthews and former Deputy National Security Advisor Mathew Pottinger got underway with both blaming former US President Donald Trump of inaction to quell the mob and resorting to shocking action on January 6 of trying to coerce his Vice-President Mike Pence not to certify 2020 presidential election against the advice of most of the West wing top aides.

Matthews said in live testimony that Trump’s refusal to act and call off the mob on January 6 was “indefensible” and she decided to resign that evening.

She added that she was “shocked” to see that Trump began his video statement at 4:17 p.m. “by pushing the lie that there was a stolen election”.

“And as the video went on, I felt a small sense of relief because he finally told these people to go home,” she said.

“But that was immediately followed up by him saying, ” “We love you. You’re very special”. And that was disturbing to me because he didn’t distinguish between those that peacefully attended his speech earlier that day and those that we watched cause violence at the Capitol.”

Matthews said another Trump aide had stated that condemning the violence would be “handing a win to the media”.

She added in a live testimony that a conversation unfolded in the White House Press office on January 6 about Trump’s latest two tweets being insufficient.

“A colleague suggested that the President shouldn’t condemn the violence because they thought it would be ‘handing a win to the media,'” Matthews said during the hearing.

“I disagreed. I thought that we should condemn the violence and condemn it unequivocally. And I thought that he needed to include a call to action and to tell these people to go home, and a debate ensued over it,” she added.

Matthews said that she became “visibly frustrated” and her colleagues were aware.

“I couldn’t believe that we’re arguing over this and in the middle of the West Wing,” she added, about concerns over the politics of a tweet.

“So, I motioned up at the TV, and I said, “Do you think it looks like we’re effing winning? Because I don’t think it does.””

Sarah Matthews said in live testimony that after Trump attacked Pence in a tweet on January 6, she immediately went to speak to the then-Press Secretary Kayleigh McEnany and told her that Trump needed to post a tweet condemning the violence.

Matthews said McEnany agreed and went to the dining room to find Trump. When McEnany returned, she told Matthews that a tweet had been sent out.

“I thought the tweet did not go far enough,” she said.

“I thought there needed to be a call to action and he needed to condemn the violence.”

Matthews said McEnany looked at her and said in a “hushed tone” that Trump didn’t “want to include any sort of mention of peace in that tweet.”

Matthews added that she was told there was a “back and forth” in which people were “going over different phrases to find something that he was comfortable with”.

“It wasn’t until Ivanka Trump suggested the phrase “stay peaceful,” that he finally agreed to include it,” she said.

Former Trump National Security aide Matt Pottinger explained in a live testimony that he decided to resign after seeing a tweet from Trump on January 6 at 2:24 p.m. in which the then President called his Vice-President, Mike Pence, a coward and blamed him for not stopping the certification.

“I read it and was quite disturbed by it,” Pottinger said during the hearing.

“I was disturbed and worried to see the President attacking Vice-President Pence for doing his constitutional duty. So, the tweet looked to me like the opposite of what we really needed at that moment, which was a de-escalation.”

“That’s why I said earlier that it looked like fuel being poured on the fire,” he added.

“That would be my last day at the White House. I simply didn’t want to be associated with the events that were unfolding on the Capitol.”