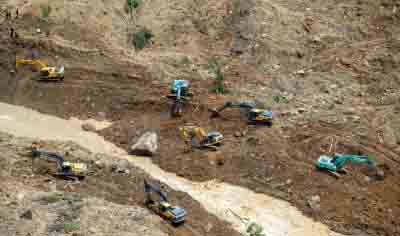 Experts have identified non-resistant soil condition, prevalence of micro-seismicity, besides changing land use patterns on the top of hills such as deforestation as the cause for the recent catastrophic landslides in Manipur.

At least 55 people, including Territorial Army soldiers,railway workers and local villagers were killed in the landslides, while search operations were still underway in inclement weather to locate six missing.

The disastrous landslides at a railway construction site at Tupul in western Manipur’s Noney district on June 29-30 buried alive over 60 people mostly of the Territorial Army soldiers.

After the unprecedented tragedy, Manipur’s Directorate of Environment and Climate Change has formed an expert group to identify the causes of the enormous landslides.

The seven-member expert group headed by Prof. Arun Kumar of the Manipur University, has identified non-resistant soil condition, prevalence of micro-seismicity, besides changing land use patterns on the top of hills such as deforestation and unscientific “Jhum” (shifting and burn method of farming) cultivation as some of the factors which triggered the landslides.

The experts, which along with Union Minister of State for External Affairs Rajkumar Ranjan Singh, who hails from Manipur, visited the site on a number of occasions stated: “Geologically, non-resistant lithology (shale interbedded with mudstone, siltstone and sandstone) of Barail Group exposed in the study area after the modification of the slope geometry that impedes the mountain’s ability to resist the existing gravitational force may become one of the causes of mass wasting and landsliding.”

According to the expert committee report, geologically, western Manipur consists of tertiary strata (rock formations), which are most vulnerable to the landslide hazards due to the seismically active tectonic terrain. The rock formations are highly jointed, fractured, faulted and display the neo-tectonic movements.

The climate is sub-humid with high rainfall (1600 mm) in Manipur, which is one of the triggering factors for most of the frequent landslide hazards with existing geological formations and typically rugged topography.

The interbedded shale, mudstone, siltstone and sandstone exhibit weak lithology and existing discontinuities in the forms of joints, cracks, faults along the moderate to steep slopes are the main triggering factors for the landslides.

The alignments of the National Highways in Manipur across the terrain have also increased the frequent landslides due to the disturbances in the toe, as most of the alignments traverse along these typical adverse geological and geomorphological situations, said the report available with IANS.

The colossal landslides were triggered following the incessant rain on June 29 and 30.

Excessive rainfall was experienced during May (375.60mm) and June (329.9 mm) at Noney District, which was approximately 60 per cent higher than the normal earlier recorded rainfall.

The Territorial Army soldiers, who were killed due to the landslides, were deployed at Tupul to provide security to the railway project in which many workers from Assam have been working.

The construction of the railway infrastructure in Noney was part of the Rs 14,320 crore broad gauge Jiribam-Imphal railway project, being executed by the Northeast Frontier Railway (NFR) to connect the Manipur capital on the rail network by 2024.

The Jiribam -Tupul-Imphal Railway Project is progressing well and the recent landslide has affected the railway formations in the proposed Tupul station yard.

“Since, it will be one of the major life-line for the state in order to transport goods and passengers from rest of the country to the state, therefore, considering the success and longevity of the ongoing project for several decades, it is necessary to adopt the regulatory monitoring of the vulnerable slopes along the railway line where the cut portion and yards are exposed,” the expert committee report said.

It said that the geology of the area cannot be changed, however, the innovation of new and emerging technologies and ideas will mitigate these disastrous situations.

Successive earthquakes in the Northeastern states, especially in Assam, Mizoram and Manipur, are keeping the authorities worried.

In September 2011, Sikkim underwent heavy damage after a quake hit the Himalayan state.

A senior geologist of the state owned Oil and Natural Gas Corporation said that incidents of landslides can be reduced but not avoided in the mountainous Northeast region since it is the world’s sixth major quake-prone area where soil and rocks get disturbed by intermittent geo-tectonic shift.

He said that there are loose soils here and the rocks are hard only in the deeper position of the earth.

“Hence, during the incessant or heavy rains soil erosion increased in a large way causing the landslides,” the geologist, told IANS refusing to be named.

He said the incidents of landslides can be curbed through plantations and adopting appropriate technology.

“To avoid such kind of massive landfalls where development projects are undertaken, maximum plantations are required. Only those plants of roots that can reach the sub-surface should be planted in consultation with experts,” suggested the geologist, who extensively worked in the northeastern region.

In Uttarakhand, which has hard rocks, the retaining walls should have steel nets to keep the earth stable, he advised.