FIDE facing ‘back rank mate’, has to return huge sums for cancelling sponsorships 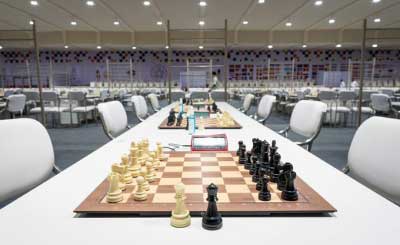 The international chess federation (FIDE) is under the constant threat of a ‘back rank mate’ or ‘discovered check’ with former Russian Deputy Prime Minister Arkady Dvorkovich as its president, said senior officials.

‘Back rank mate’ is a chess term where a King gets locked up in the last row without an escape route and gets checkmated. The term ‘discovered check’ is one where an opponent moves his piece away and threatens the opponent King with another piece.

They also said FIDE is in a tough position financially.

Firstly, FIDE has to return a huge amount to a couple of Russian corporations after cancelling their sponsorship contracts following Russia’s military action against Ukraine.

Secondly, attracting fresh corporate sponsors will be a difficult thing as non-Russian companies may not be willing to come forward to help a sport having strong ties with Russia.

They also added that the FIDE functioning is shrouded in secrecy with the FIDE Council more or less converted into a rubber-stamp body and the crucial decisions are taken by the FIDE Management Board with people picked by Dvorkovich.

That apart, FIDE is a small body when compared to other global sports bodies and there is also the risk of de-recognition by the International Olympic Committee (IOC) which in turn would have a global impact on chess players and national chess bodies getting funds from their respective governments, Kouatly added.

Kouatly, who was part of Dvorkovich’s team since 2018, is now contesting against the latter along with FIDE’s honorary vice-president Ian Wilkinson.

Similarly, Enyonam Sewa Fumey, vice-president of the Togo Chess Federation was part of Dvorkovich’s team initially as FIDE’s general secretary between 2018 and 2021 and later resigned over ideological differences.

Fumey had earlier told IANS that a day after they got elected in 2018, a FIDE Management Board was created and the organisation totally changed its operations.

“No one knows on what basis the Management Board members are selected and how much they get paid. The times have changed. A good chess player need not be a good administrator. Chess management needs people from diverse fields like advertising, streamers and others,” he added.

Kouatly, on the reasons for running against Dvorkovich, said, “The situation in FIDE has changed after February 24 (the day Russia began its military action against Ukraine). Arkady is synonymous with Russia. So, fresh corporate sponsorship from other global companies may not come about. There are sanctions against Russian companies. In March, I told Arkady that I am an independent person.”

So, what are the poll promises of Kouatly and Wilkinson’s team? Why should a national chess federation vote for them?

“There are many federations that are very poor and they need help. We will provide the necessary training to those officials on managing and attracting finance. We will also distribute about one million chess boards to various federations,” Kouatly said.

“FIDE doesn’t help the national federations enough. Private companies make tons of money out of chess but not the FIDE,” Wilkinson added.

The other important task for his team is to reform the World Championship Match.

“We need to bring in more sponsors. We have to discuss with the sponsors, streamers on the World Championship format. Get a fresh perspective on the issue by bringing in outside talent,” Kouatly said.

According to him, a large number of people play chess in the world and one should look at ways to attract them to become a rated player.

“We want to transform FIDE and make it a transparent body. All these years the Olympiad was held in Europe and Asia. Why was it not held in the US and Africa? FIDE is a political tool for Russia,” Wilkinson remarked.

According to Wilkinson, the FIDE elections to be held soon here will throw up a surprise and Arkady may not get some of the votes that he is hoping for.

Meanwhile a list of questions sent by IANS earlier to Dvorkovich on the financial impact of sponsorship cancellation, status of his 2018 FIDE election poll promises made — such as increasing the size of FIDE budget, bringing in corporate sponsorship (promise made 12 million euros), restructuring of FIDE, reviewing various contracts signed by the earlier regime and other things — remain unanswered despite reminders.