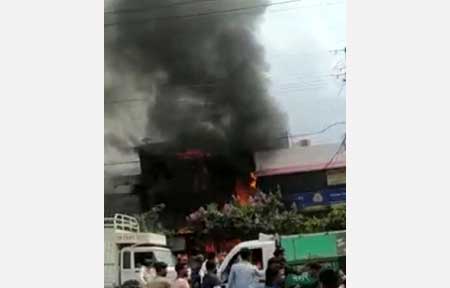 At least 10 people have been killed after a massive fire broke out on Monday in a hospital in Madhya Pradesh’s Jabalpur, officials said.

Several fire tenders were rushed to the New Life Multispeciality Hospital which eventually managed to bring the blaze under control.

Many people including patients and hospital staff were inside the building when the fire had broken out.

Madhya Pradesh Medical Education Minister Vishwas Sarang said though the exact cause of fire is yet to be ascertained, a short-circuit is being suspected as one of the reasons.

Saying that that fire has been doused and people trapped inside the hospital have been evacuated, he said: “At present, I can’t say why many people have lost lives, as the operation is still underway. I am in touch with the Jabalpur district collector, who is on the spot and leading the rescue operation.”

All the patients are being shifted to the nearby hospitals.

Jabalpur SP Siddharth Bahuguna said at least 10 casualties have been reported so far.

He said the fire possibly broke out due to short circuit during changeover of electricity supply from the generator after a power cut.

The fire broke out on the ground floor of the hospital around 4.30 p.m., and engulfed the entire three-storey building.

Meanwhile, Madhya Pradesh Chief Minister Shivraj Singh Chouhan, expressing grief over the incident, has announced a compensation of Rs 5 lakh to the kin of the deceased.