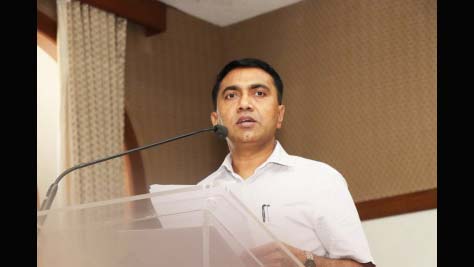 Under fire over “inadequate” investigation into the Sonali Phogat death case, Goa Chief Minister Pramod Sawant has directed the top officials of state administration and police to strengthen the Anti Narcotic cell.

Chief Minister Sawant issued the direction during a meeting with top officials of state administration and police, convened to discuss and deliberate on various issues, including the death case.

The opposition has cornered the ruling BJP over the death of the TikTok star to whom alleged Methamphetamine drugs were given.

According to Goa police, Methamphetamine drugs given to Phogat have been seized from the washroom of the Curlies restaurant in Anjuna-Goa.

However, the Goa police swiftly clarified that no request was received for any assistance for the arrest of any of the accused persons from its Hyderabad counterpart.

“Our team had gone to Goa, but we couldn’t arrest Edwin Nunes. During the investigation of the Sonali Phogat case, the Goa Police named him. Then we got to know that all the drug peddlers involved in the case are from Goa only,” the Hyderabad police official said in a video which has gone viral.

“Whenever we communicate with them (Goa police), negative results come. If we try to nab someone (accused persons from Goa), we don’t get them. There is nothing to hide, I am telling openly that Goa Police are not cooperating,” Hyderabad Police said.

Responding, Goa Police has clarified that they have never received any request for assistance from their counterpart at Hyderabad.

Following the development, Chief Minister Sawant called a meeting of top officials and asked them to further strengthen the Anti-Narcotic Cell in the State.

Senior Officials of State Administration including Chief Secretary, District Collectors and Senior Police Officials were present for the meeting.

Directions have also been issued by the Chief Minister to crack down on Anti-Social elements and take tough action.