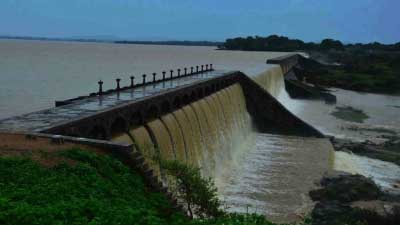 River Godavari in Andhra Pradesh remained in spate as widespread rain continue in upstream districts in the state and also in neighbouring Telangana.

The inflow at Dowleswaram barrage was 13.02 lakh cusecs. Flood water entered Goshpada Kshetram at Kovvur in East Godavari district. The temple on the banks of the river was inundated.

State Disaster Response Management Authority Managing Director Dr B.R. Ambedkar said Athe administration in mandals along the course of river Godavari have been alerted. He said the situation was being closely monitored and all required precautionary measures were being taken.

As the water level is likely to rise further, the authorities were keeping a close watch on the situation.

People in the Godavari catchment areas have been asked to remain alert. The East and West Godavari districts, Eluru, Rajahmundry, Alluri Sitaramaraju and Ambedkar Konaseema districts are on alert.

The authority has advised people not to get into the swollen river for any reason and also avoid travel by boats.