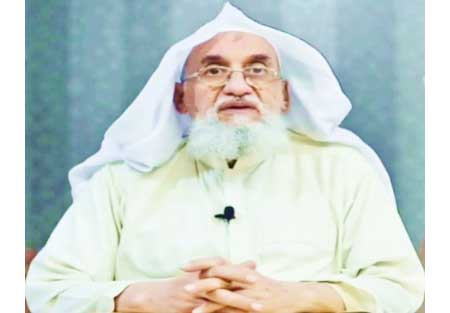 Terrorists in the Haqqani Network worked quickly after the US drone strike in Kabul to cover up that slain Al Qaeda leader Ayman al-Zawahiri had been living in the safe house, including evacuating his wife and children, an American administration official said.

An unmanned aerial vehicle launched two Hellfire missiles at a safe house in Kabul on Sunday, hitting al-Zawahiri when he stepped onto a balcony, Defense One reported citing the official as saying.

Family members in other parts of the safe house were not harmed, and there are no indications that any other civilians were hurt in the strike, the official added.

The official declined to say which agency conducted the strike, saying that it was a “team effort” by the American government.

The official said there were “zero” American personnel on the ground in Afghanistan during the operation, Defense One reported.

In a televised address to the nation on Monday, Biden confirmed that al-Zawahiri was killed in the drone strike, saying he had approved the attack on July 25 after meeting with senior cabinet members and advisors for a final briefing.

He said al-Zawahiri had “carved a trail of murder and violence against American citizens”.

“Now justice has been delivered and this terrorist leader is no more,” he added.

His killing will bring closure to families of the nearly 3,000 victims of the 2001 attacks, Biden added.

“No matter how long it takes, no matter where you hide, if you are a threat to our people, the US will find you and take you out… We shall never waver from defending our nation and its people”.

Biden said al-Zawahiri had also masterminded other acts of violence, including the suicide bombing of the USS Cole naval destroyer in Aden in October 2000 which killed 17 US sailors, and the 1998 attacks on the US embassies in Kenya and Tanzania, in which 223 people died.

The strike against al-Zawahiri, who succeeded Osama bin Laden after the latter was killed by Navy SEALs in 2011, is the first major American military action in Afghanistan since the military withdrew last August.

The departure of Western troops raised concerns that the US government would struggle to conduct missions and collect intelligence from “over the horizon”.