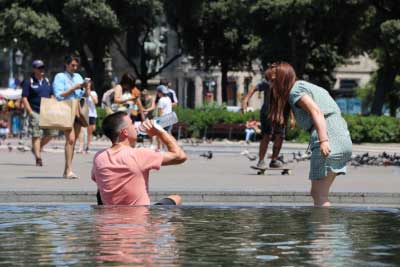 High temperatures and low rainfall in Spain are likely to continue into the autumn, exacerbating wildfires and drought, according to AEMET, the country’s meteorological agency.

Spain is experiencing one of its hottest summers on record, with major heat waves coming earlier in the year than usual, in June, and continuing into July to claim over 2000 lives, reports Xinhua news agency.

Over 200,000 hectares of land in Spain have been ravaged by wildfires, and with reservoirs currently at under 42 per cent capacity (20 per cent lower than the average for the last 10 years), some regions are starting to introduce restrictions on water use.

There are also fears that crops such as soft fruits will be seriously affected.

AEMET’s report published on Monday makes for worrying reading, with the agency predicting a 60 per cent chance that August, September and October will be hotter than the average for the period 1981-2020.

Meanwhile, it said there is a 30 per cent chance that temperatures will be in line with the 40-year-average, and only a 10 per cent possibility that the weather will be cooler than average.

“Temperatures will be higher than normal,” AEMET spokesperson Ruben del Campo told reporters here. In the first half of August and possibly also in the second, temperatures in the north and central Spain will be 3-6 degrees centigrade above average, he added.

Regarding rainfall, AEMET reports there “is a higher probability of precipitation being less than normal, especially in the east of Spain and the Canary Islands”.

The agency has predicted a 45 per cent chance of drier than average weather for the west and the centre of the country, with a 35 per cent chance that rainfall will be in line with the average.

There is only a 20 per cent chance of more rain than usual, according to AEMET.

The recent heat wave has also led to more than 500 deaths in Spain.