Heavy rains continue to lash Gujarat, flood like situation in many areas 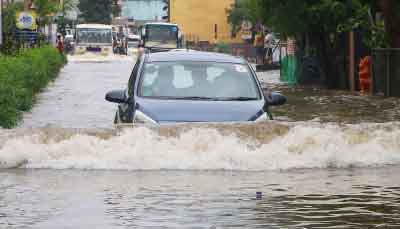 Heavy rains continue to lash several parts of Gujarat for the last two days affecting normal life in the state. Bodeli taluka of Chhota Udepur district has received maximum 20 inch rain leaving several villages in the district cut off from the rest of the state. Locals claim that four persons were swept away in the flood.

Power supply of 66 villages has been disrupted and several houses have collapsed. A total of 3,250 people have been evacuated in Gujarat, including 400 in Chhota Udepur, 550 in Navsari and 470 in Valsad.

Chief Minister Bhupendra Patel has asked all district collectors to evacuate people trapped in low lying areas. There was flooding in some low-lying areas of Valsad after a rise in the level of Orsang river. Authorities in the Navsari district are also on alert as the Kaveri and Ambika rivers were flowing above the danger mark.

Gujarat has received a total of 12 inches of rain for the season so far. Kutch has received 11.75 inches so far. North Gujarat received 5.78 inches, South Gujarat 24.28 inches, Central Gujarat 9.53 inches and Saurashtra 11.12 inches. The state has received 36 per cent rainfall so far. In Bodeli in Chhota Udepur district, low-lying areas were waterlogged with record-breaking 17 inches of rain from 6 a.m. to 6 p.m. on Sunday.

Late on Sunday evening, Ahmedabad was also flooded due to heavy rains. Low-lying areas in the city were inundated with the rise in the water level of some rivers. Ahmedabad has received 30 per cent of the season’s rainfall in the last three days. Paldi, Vasana, and Ellis Bridge areas received the maximum rainfall of 241.3 mm. With continuous rains, Paldi, Bodakdev, Usmanpura, and Jodhpur areas of Ahmedabad were water-logged.

Due to heavy rains, the wall of AUDA Lake on Prahladnagar Road, Ahmedabad collapsed flooding the basement of Vraj Vihar Apartment next to it. The cars parked in the parking lot were seen floating in water. Some cars got stuck in huge potholes in Shahibaug and Shela areas. The Ahmedabad Municipal Corporation decided to keep schools and colleges shut on Monday in view of the heavy rains and water-logging.

Chief Minister Bhupendra Patel on Sunday held a meeting with District Collectors from the State Emergency Operations Centre to review the measures taken to deal with the situation arising out of heavy rains in South Gujarat, including Chhota Udepur. Gujarat Disaster Management Minister Rajendra Trivedi on Sunday said that the state has made arrangements to shift people staying in low-lying areas to safer places.

10 killed in street attack in Montenegro