How some people dodge arrest after consuming alcohol in dry Gujarat 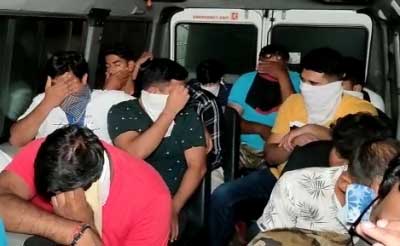 The police may be arresting hundreds of people across Gujarat every week for violating the prohibition law, but there are people who dodge arrests despite being inebriate.

Senior crime reporter Sailesh Trivedi shared certain pertinent facts. Trivedi said: “Nowadays, a well-to-do families mostly organise parties at their farm houses that are in remote places, and after drinking, they don’t return to the city in next 24 hours.”

“If people are not that financially sound, they organise parties at home; and when guests have to return, they either chew mouth fresheners or eat chocolates to kill the smell of liquor. Some even travel with family so that police doesn’t suspect them,” he said.

In Surat and South Gujarat, there are some castes and communities that serve liquor to guests on certain occasions like wedding or death in family. This is a tradition. Original Surtis serve liquor with snacks to those who have come to the crematorium with dead body. Being aware of the custom, the police are liberal in this reagion.

However, “Nowadays in cities like Ahmedabad, Vadodara, and Anand, it is very common to book club houses and hotel rooms for booze parties. The club house security or hotel staff protects guests from the police,” said Anita Patni, a crime reporter from Ahmedabad.

“If any individual is arrested on the street, the person will see the rank of police personnel and then contact a politician or senior officer to influence the cop on ground and evade arrest. Sometimes, even media persons intervene, requesting the police to not arrest,” said the crime reporter.

Some people even go to Union Territories like Daman & Diu and Dadra & Nagar Haveli, or Mount Abu or Udaipur, in Rajasthan, or Dahanu, Mumbai or Nasik in Maharashtra and even as far as Goa for liquor.

Vivek is party-goer in Ahmedabad and has attended many liquor parties. He invites very influential professionals, politician and officers to the party. Their presence is a cover of protection. Big businessmen and builders are nearly immune from arrests.