In a first, man tests positive for monkeypox, Covid & HIV at a time 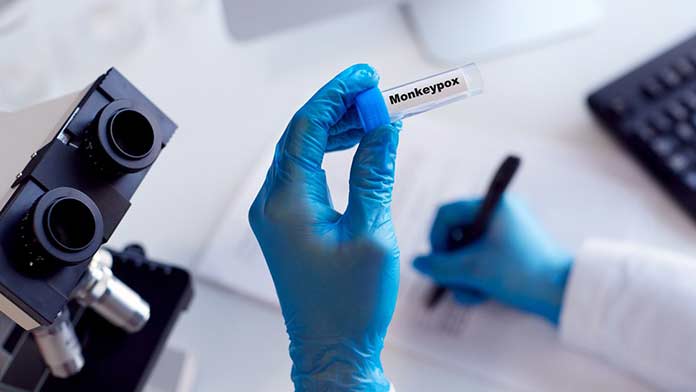 A 36-year-old man in Italy has reportedly tested positive for Monkeypox, COVID-19 and HIV at the same time in the first known case.
According to a report published in the Journal of Infection, the patient, whose name hasn’t been disclosed, developed fever, a sore throat, fatigue, headache and inflammation of the groin area about nine days after returning from a five-day trip to Spain. The man tested positive for coronavirus three days after the symptoms appeared.
He also developed severe skin rashes on the face and other body parts, followed by the formation of pustules. Given the severity of the condition, the man then visited a hospital’s emergency department, where he was subsequently referred to the infectious disease unit for admission.
According to Newsweek, the man’s physical examination revealed spots and skin lesions in various body parts, including the perianal region. A modest enlargement of the liver and spleen and painful enlargement of the lymph nodes too were noticed.
His test report confirmed the presence of Monkeypox infection. He also tested positive for HIV. Moreover, sequencing of the SARS-CoV-2 genome confirmed that he was infected with the Omicron sub-variant BA.5.1 as well. According to the paper, the man was vaccinated for coronavirus with two doses of Pfizer’s mRNA vaccine.
His case was published in the Journal of Infection on August 19. The man was discharged from the hospital after nearly a week. He recovered from COVID-19 and Monkeypox, although a small scar remained. The treatment for his HIV infection was initiated.
“This case highlights how Monkeypox and COVID-19 symptoms may overlap, and corroborates how in case of co-infection, anamnestic collection and sexual habits are crucial to perform the correct diagnosis,” the researchers said in their case report.
“To note, the Monkeypox oropharyngeal swab was still positive after 20 days, suggesting that these individuals may still be contagious for several days after clinical remission. Consequently, physicians should encourage appropriate precautions,” it added.
The researchers also stated that as this is the only reported case of Monkeypox virus, COVID-19 and HIV co-infection, and added that there is still not enough evidence supporting that this combination may aggravate the patient’s condition.