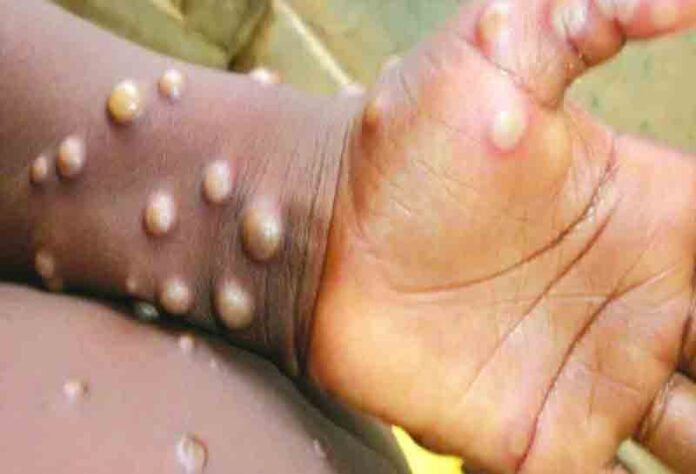 A 31-year old man who arrived in Kerala last week from Dubai has tested positive for monkeypox, making it the second case in India this year, state Health Minister Veena George said on Monday.
The minister said the patient, who arrived in Kerala on July 13, was a native of Kannur in north Kerala and was undergoing treatment at the Pariyaram Medical College there.
His health is stable, she said. The minister also said that all those who were in close contact with the patient are being closely monitored. The first case of monkeypox, a rare but potentially serious viral illness, was reported from Kollam district of south Kerala on July 14. He is currently undergoing treatment at the Government Medical College Hospital, Thiruvananthapuram.
Union Health Ministry officials said in New Delhi that the patient in Kannur had landed at the Mangaluru airport in Karnataka from Dubai on July 13.
He was admitted to the hospital after he exhibited symptoms of the disease.
His samples were sent to the National Institute of Virology (NIV), Pune, and they tested positive for the virus, the official said.
Meanwhile, the Kerala Health Minister held discussions with the central team visiting the southern state to study the situation. After the meeting, she said the state government will introduce the monkeypox diagnosis system in government labs.
“There are 28 government labs in the state that can conduct COVID RT-PCR tests. In the first phase, test kits for detecting monkeypox will be immediately made available from NIV Pune to NIV Alappuzha and tests will be conducted in the Alappuzha lab itself,” the minister’s office said in a statement. It said the central team briefed her about the details of their three-day visit to the state.
“The team expressed satisfaction over the preventive measures being taken by the state,” the statement said. The minister’s office said the state government is taking strong measures to prevent the spread of the disease. “Help desks have been set up at all international airports and surveillance has been intensified. If any of the passengers show symptoms of infection, they will be safely taken to isolation centres for testing and specialist treatment,” it said.
It further said awareness about the disease has been strengthened for those coming from countries where monkeypox has been reported and state-level control rooms and a district level control room were set up to coordinate the activities.
Guidelines for disease surveillance and management are being prepared, the statement said.
“Isolation facilities have been set up in selected hospitals in the districts. A special ambulance system has been arranged in the districts to shift the people with symptoms to hospitals. Health workers including doctors are being trained. The minister also informed that strong awareness activities are being carried out to avoid public concern”, it added.
According to the World Health Organisation, monkeypox is a viral zoonosis (a virus transmitted to humans from animals), with symptoms similar to those seen in the past in smallpox patients, although it is clinically less severe.
With the eradication of smallpox in 1980 and subsequent cessation of smallpox vaccination, monkeypox has emerged as the most important orthopoxvirus for public health.