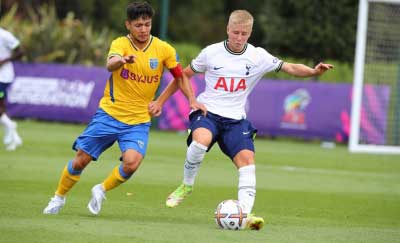 Kerala Blasters FC reserve team captain Ayush Adhikari believes the day is not far from an Indian featuring in the Premier League. The midfielder felt that initiatives like the Next Generation Cup will help develop Indian youngsters, bridging the gap in the quality between Indian and European football.

“When you pick up football as a youngster in India, you look up to the European teams like the ones we played. There is a gap that I think we are narrowing down and we can cope with it. To take an example, just two days after our first match, we gave Crystal Palace a tough fight and they struggled to get a goal out of us in the first half,” said Adhikari, who scored in Kerala Blasters’ 3rd/4th place playoff against Crystal Palace’s academy team after losing to Tottenham Hotspur in the semi-final.

“I think if we keep going like this, keep on having these programmes and initiatives, we will develop, and someday you will see an Indian player playing in the Premier League,” Adhikari opined. Kerala Blasters lost 4-1 to the London club on Saturday.

In addition to Kerala Blasters, Bengaluru FC featured in the Next Generation Cup, 2022 in the United Kingdom along with five Premier League academy teams and one South African side. The tournament is a part of Premier League’s long-term partnership with Football Sports Development Limited (FSDL) with a focus to grow the profile of the sport in India.

“It is a great initiative to give players this kind of exposure because everyone sees these clubs on television and every player dreams to be here. Finally, when a chance comes, the players are grateful to play against these top teams,” Adhikari remarked.

“We were here to learn and experience what European football quality is all about. The players are fast and skilled, tactically, they possess good knowledge of the game and we experienced what playing in Europe is like.”

“It is a delightful feeling to be part of the trip. The infrastructure in the clubs we visited is top quality, with more than 20 pitches to just train. Those things are huge, this is football at the big level. The atmosphere here is insane. Any player would love to be here,” added the Delhi-born.

Adhikari, who has featured for the first team as well under Ivan Vukomanovic last season, said that the matches would only help him prepare better for the upcoming season.

“It was good to play these matches. I got to know the pace and the quality of European football. Playing against top-tier teams’ youth sides made me understand what is required to play at the top level,” he said.