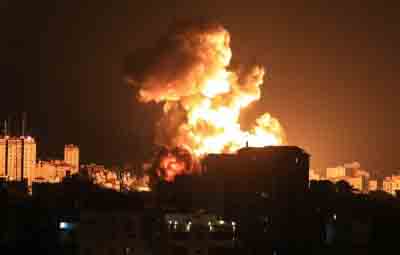 Israel has decided to cancel a recently increased quota of work permits for Palestinian labourers from Gaza in response to rocket attacks.

The decision was announced by the Coordinator of Government Activities in the Territories (COGAT), Israel’s military liaison to the Palestinians, on Saturday.

“Hamas takes responsibility for everything that happens in the Gaza Strip,” said the statement from COGAT.

Earlier on Saturday, four rockets were fired into southern Israel by militants in the Gaza Strip, with no casualties or damages reported. In response, Israeli fighter jets launched an airstrike in the Strip against what it said the Hamas military targets.

The incident occurred hours after US President Joe Biden completed his visit to Israel and the Palestinian territories, Xinhua news agency reported.

The decision to increase the work permits was taken earlier in the week, as part of a series of gestures Israel made ahead of Biden’s visit.

Israel gives thousands of work permits to Palestinians in the Gaza Strip, allowing them to work in Israel to make a living.

The Hamas militant organisation has fought several conflicts with Israel since it ruled the Gaza Strip in 2007. Since then, Israel has imposed a strict blockade on the territory, which Hamas has vowed to break through violence.

The Gaza Strip is considered one of the poorest territories in the world.

Photography exhibition on ‘Journey of Nagaland through the lens’