Jubilation to His Faithfulness: the story of EU KSCJ 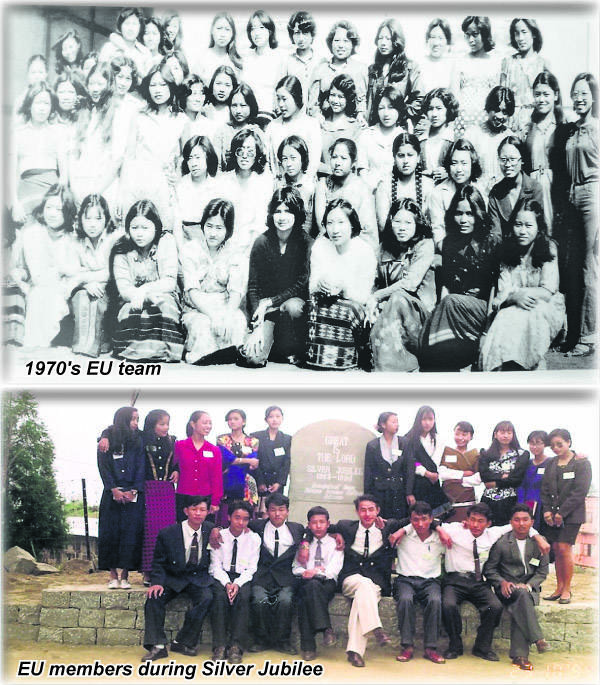 The Evangelical Union of Kohima Science College, Jotsoma(EUKSCJ)is celebrating its golden jubilee this 2nd week of October with Jubilation to his faithfulness as the theme. Fifty years is a long period especially so because within that period, scores of batches of students have come and gone, the pioneers retired now having given their best to the world, the present living out their faith.

With vision, courage and determination, our pioneers undertook this journey of faith on a ‘road less travelled’. (There is something touchingly sweet in the mental picture of this group of people who, in 1969, gathered in a tiny, nondescript hostel room to pray sparking off this ministry in the campus).

In the words of Mr. Imie Ao (the 1st President of EUKSCJ 1969-70) “… Adhikari came in the month of October, in 1969. I remember it was a Sunday and a very pleasant day and we held two services, a morning and an evening service and by the Grace of God it was very successful.

The most successful part of the service was the evening service where seven members of our hostellers accepted Jesus Christ as their Savior. This was the beginning of the Evangelical Union of India at Kohima Science College.”

They would have gone through excitement as well as discouragement, despondency and the temptation to get side tracked. But the sovereignty of God, and not least His faithfulness, carried this ministry through; in the process giving us many beautiful stories to tell. Hence we jubilate in His faithfulness!

The early years were difficult. One of the early pioneer Prof. Tali Alinger recalls vividly the early struggles … “My wife and I were very happy to start associating ourselves with the EU members of Science College, knowing that the Lord had called us to this ministry from the very beginning.

Two of us started going to Science College campus from Kohima town to attend EU meetings almost every Sunday afternoon from January 1974. Conditions of life were very different and difficult in those days. Modern benefits and facilities we enjoy today due to scientific and technological advancement were beyond imagination and dream.

The road condition between Kohima town and Science College campus was very poor and narrow- it was all very thickly forested in both sides of the road leading to the college campus. There was no taxi facility and the students had to walk carrying their luggages on their backs to reach their destination… but it seemed nothing to us compared to our overwhelming joy shared with the EU students in the fellowship programmes. To see the members growing gradually in the process of maturity through the work of the Holy Spirit and the power of the Word of God has been our greatest joy over the years.”

Evangelical Union is a fellowship of like-minded believing students in the campuses with a mission “to evangelize post-matric students in India, nurture them as disciples of the Lord Jesus Christ, that they may serve the church and the society”.

Reminiscing the early years, Er. N.Khoto Zetsuvi (President 1975-76 & Convener Planning Committee EUKSCJ Golden Jubilee) states that… “Joining E.U. was one of the most important decisions I made in my spiritual journey. The fact that EUKSCJ was started in 1969, we were at the very early period of EU existence/establishment in Kohima Science College, Jotsoma. The Fellowship was vibrant and the class room where we conducted our services was usually packed.

There was not too many who could preach in English those days. However, we had few people to approach, who were ever ready to help. We kept visiting these people, requesting them to speak. Some of them were: our principal Kiremwati Aier, Dr. H.V. Sakhrie, D.K. Zeliang, Lanu Toy, Prof. TaliAlinger, Dr.Sato Sekhose, Alongla, Kilemla and others.”

Kelevituo Nisa Former General Secretary KSCJ Students Union & EU Member recalls gratefully… “I vividly remember the times when I alongside with Viketou Chupuo who was the EU president, Kelvin Tep and some others would often step into the pristine interior of this CYC at night and together we sang and prayed for and committed our works programs, problems and joys into His hand and the results did we see because God is faithful.

Everything went well even in the face of adversity… This earthly tent that I dwelled in found a firm footing and a sound base because the EU made its presence when life was budding, when life could have taken any direc¬tion depending on what force shaped it the most.”

Recounting the impact of EU ministry in the campus, Dr. Lily Sema, the present Principal of Kohima Science College (autonomous) Jotsoma, opines that “Evangelical Union, Kohima Science College in the last 50 years has nurtured and shaped the lives of thousands of young people from all over the state who have come to study in this prestigious science institute. Not only have they earned their degrees but they have also been moulded and trained to walk in the ways of our Lord Jesus Christ.

The alumni of this college, who, while remaining strongly rooted in their faith and fear of the Lord, have become leaders and responsible citizens, and are leading the way in transforming our society.

The holistic growth of the students of KSC has been possible only because of the persistent efforts and sacrifices made by the many individuals committed to bringing the youth to Christ through the Evangelical Union in the campus.” Over the years, the small rivulet has become an ocean, sustaining and quenching the spiritual thirst amongst the student community here in our land, many of whom have become Christ’s ambassadors as professional doctors, teachers, government servants, church workers and missionaries.

The list is not exhaustive. Perhaps, the greatest impact of EUKSCJ & UESI ministry here in Nagaland lie in its emphases on core doctrinal values such as, teachings on the assurance of personal salvation and being born again.

EU camps became the melting-pot where sound Christian biblical doctrines were imparted with devastating effectiveness. The alumni of EU, KSCJ became agents of change, making a difference wherever they went.

There are several stories of God’s faithfulness which space does not allow us to narrate nor can it be told as vividly as has been captured by Er. Khoto Zetsuvi in “The Spark that Sets the Fire” (Jubilee Souvenir) about Rev Kenilevi Khate, who during the early ‘70s, having experienced the saving knowledge of Jesus Christ couldn’t contain himself but gave in fully to the proclamation of the gospel like a wildfire.

Definitely, there will also be other such stories forgotten by time, space and fading memories but not forgotten in heaven. The formation of EU at KSC during the tumultuous period of our political history perhaps has come full circle in its fiftieth years of existence in 2019, as we face another political dilemma in the form of the Framework Agreement. As EU, KSCJ celebrates in “Jubilation to His Faithfulness,” may He find us faithful.

As such, with so much heritage and testimonies of faith, it is appropriate that a Jubilee as instituted by God Himself is celebrated with gratitude and rededication, remembering at the same time that behind the pomp and show a jubilee is about living and exercising the tenets enshrined in the essence and definition of a jubilee.  Leviticus 25 tells us that jubilee is a time when all mortgages are cancelled, bondages of men annulled, debts forgiven, and lands reverted to the original owners.

Those of us celebrating today find ourselves at the cross roads of the past and the future of the timeless Scripture and the seemingly positive but undependable post modernism precepts.

It is in this midst that we hear the voice of our predecessor who “told us about God’s faithfulness,” (Isaiah 38). We have carried this torch thus far, yet are aware that we need to continue communicating even in the times to come as this jubilee is also the beginning of another 50 years in the future.

To this end, the Evangelical Union of Kohima Science College, Jotsoma (EUKSCJ) is organizing Two-Day Golden Jubilee Celebration on 12th & 13th October 2019 at College Auditorium. On the evening of Day One. MoatoshiImsong, the State Secretary of UESI Nagaland will unveil the Golden Jubilee monolith at CYC premises, with the Inaugural service scheduled at 4:00PM.