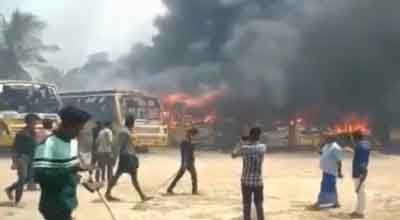 The Tamil Nadu government on Tuesday transferred the Kallakurichi District Collector and Superintendent of Police after the Sunday violence in which a mob vandalised a private school.

Protesting the suicide of a Class 12 student, a group of people had vandalised the school and torched several school buses and a few police vans during the violent protests on Sunday.

The opposition has termed the Kallakurichi incident as an example of the failure of the law and order situation of the state. The Madras High Court had come down heavily on the perpetrators of the violence and said that it was a meticulously planned and executed violence instead of a sporadic one and called upon the government to take stringent action against those who had planned it.

In a related development, the second autopsy of the student who allegedly committed suicide began at the Kallakurichi district hospital after the Madras High Court direction on a petition filed by her father.