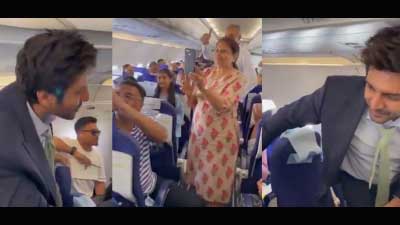 Ditching the luxury of sitting in a business class on a flight, Bollywood actor Kartik Aaryan chose to travel like just another passenger in economy class.

A video of Kartik has taken over the Internet, where the actor is seen travelling in economy class of the flight after attending an event in Jodhpur.

In the clip, Kartik is seen meeting and greeting passengers on board. People are even seen clapping and praising him for her performance in his last release ‘Bhool Bhulaiyaa 2’, which turned out to be a blockbuster on the box-office.

This is not the first time Kartik has ditched luxury. He was seen travelling in economy class during promotions of ‘Bhool Bhulaiyaa’.

On the acting front, Kartik has a motley of films such as ‘Shehzaada’, ‘Captain India’, ‘Aashiqui 3’ and ‘Satyaprem Ki Katha’.