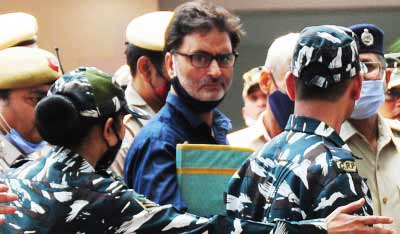 “He was referred to Ram Manohar Lohia hospital on Tuesday due to some fluctuation in his blood pressure,” a senior prison official told IANS.

The official informed that for further examination Malik was admitted to the hospital and is currently hospitalised there.

Malik was convicted in connection with a 2017 terror funding case and sentenced to life imprisonment on May 25 by an National Investigation Agency special court.

The jailed separatist leader, who is currently lodged at Jail No. 7 of the Tihar Prison, went on hunger strike on July 22. When asked the reason behind his hunger strike, the official refrained from divulging any details further, however, prison sources said that Malik is protesting against the agencies that are investigating his cases.

“Malik is alleging that his case is not being investigated properly, hence he went on an indefinite hunger strike,” sources said.

Notably, Malik is not just separated from the outside world, he is even kept alone inside the prison, away from nearly 13,000 prisoners there.

The Tihar prison’s Jail Number 7, where Malik is lodged, has been always in the limelight as it has housed several high-profile prisoners, including former Finance Minister P. Chidambaram, former Union Minister A. Raja, Sahara head Subrata Roy, Christian Michel among several others.

The Court in its order had awarded two life sentences and five punishments of 10 years of ‘Rigorous Imprisonment’ each to the convict. Rigorous imprisonment means confinement of the offender in a manner that increases the hardship of the jail term based upon the nature of the offence by subjecting the offender to special arrangements in the jail.

However, despite the court orders, Malik was not given any work inside the prison. “He won’t be assigned work at all due to security reasons,” a top prison official told IANS, adding the work is assigned subject to security concerns and the decision is taken as per jail rules.

Pertinently, a few months back, another high-profile prisoner, Sukesh Chandrashekhar, protested against the prison authorities to meet his wife more than two times a month and subsequently twice went on hunger strike for 10 days and then again for nine days in the month of May.

The top prison official informed that Sukesh was demanding to arrange a meeting with his wife Leena Maria Paul, who is currently lodged in Jail no 6 of Tihar Jail. For this misconduct, a Jail punishment was also made against Sukesh Chandrashekhar.