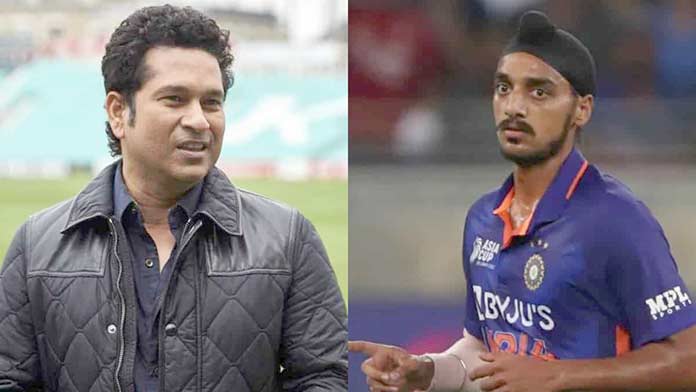 Batting legend Sachin Tendulkar on Tuesday backed Arshdeep Singh and urged the fans to keep cricket “free from personal attacks” after the young pacer faced vitriolic online abuse in the aftermath of India’s five-wicket loss to Pakistan in the Asia Cup.
The 23-year-old left-arm pacer was vehemently criticised and trolled on social media for spilling a catch in the crucial Super 4 clash against Pakistan in the Asia Cup in Dubai on Sunday.
“Every athlete representing the country gives their best and plays for the nation always. They need our constant support & remember, that in sports you win some & you lose some. Let’s keep cricket or any other sport free from personal attacks. @arshdeepsinghh keep working hard,” Tendulkar tweeted.
“.. and give the best reply by performing on the field. I am keenly following you. My best wishes.”
Arshdeep had dropped a catching chance at short third man off spinner Ravi Bishnoi’s bowling in the 18th over to hand a life to Pakistan batter Asif Ali during a tricky chase.
The pacer, however, quickly regained his composure and trapped Ali in front of wicket with a perfect yorker in the final over after senior pacer colleague Bhuvneshwar Kumar bled 19 runs in the penultimate over.
However, such was the vitriol, that some fans hacked and edited Arshdeep’s wikipedia page, adding the objectionable term “Khalistani” by his name.
The hacker changed Arshdeep’s named to Major Arshdeep Singh Langra and then Major Arshdeep Singh Bajwa. Soon corrective measures were taken and the page was restored to its original form.
Among other cricketers, Virat Kohli, Harbhajan Singh and Irfan Pathan too backed the young seamer.
“Under pressure, anyone can make a mistake. It’s a big match and the situation was tight,” Kohli had said during the post-match press conference.
“I remember when I first played in the Champions Trophy. Against Pakistan, I remember I hit a very bad shot off Shahid Afridi. Till 5 am next morning, I was only staring at the ceiling, unable to sleep.
“I thought I’ll never get a game again, my career is over. So it’s natural to feel like this.”