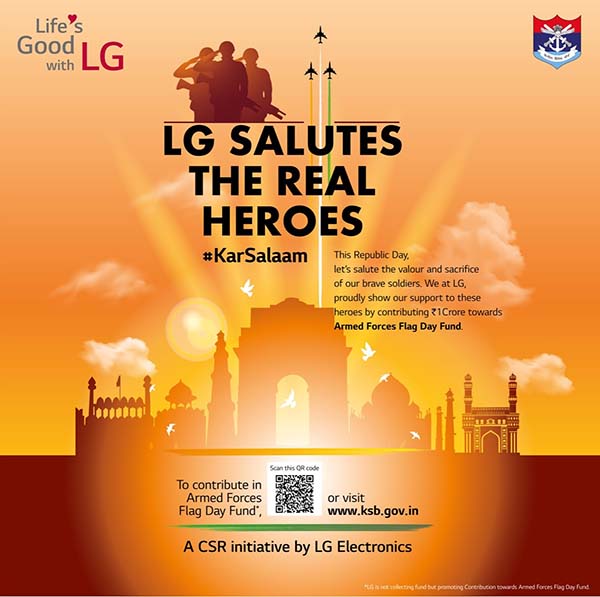 Continuing with the commitment to support the Armed Forces, India’s leading consumer durable company, LG Electronics under its “Kar Salaam initiative” has pledged to contribute Rs. 1 Crore to the Armed Forces Flag Day Fund (AFFDF) on Republic Day.
Launched in 2017, the ‘Kar Salaam’ initiative has been dedicated to the veterans of Indian Armed Forces saluting their spirit of generous contribution and service towards the nation. The contributions made in 2021 were utilized in funding education of children.
To further support the cause, LG will be conducting a public awareness drive to request and urge people to come forward, show support for the cause and contribute to the Armed Forces Flag Day Fund. LG Electronics will also run a TV, radio and digital campaign between January 20 and January 31, 2022, to further amplify communication across the masses for the initiative. The awareness campaign will also run at 7,000 retail stores across the country. Commenting on the occasion, YoungLak Kim- MD LG Electronics India said, “LG Electronics has been operating in India for the past 25 years and we have always been committed for welfare of society. Our Kar Salaam initiative underscores this philosophy and is a gratitude to the brave hearts who have selflessly contributed to the nation. We thank the Kendriya Sainik Board for helping us implement this initiative and hope we would be able to bring some positivity and joy to the families of thousands of ex-servicemen of the Defence Forces.”
Meanwhile, Air Cmde B Ahluwalia, VSM , secretary KSB thanked the LG Electronics for their continued support and for inspiring others to come forward and contribute to the welfare of those who had dedicated their lives for the nation.