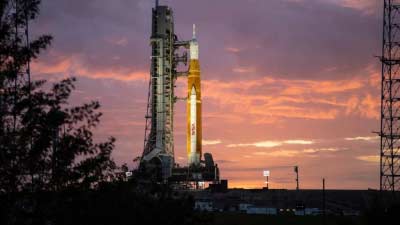 The US space agency is geared up to send its debut Space Launch System (SLS) mission called Artemis I into deep space on Monday that will perform a long orbit around the Moon before coming back to Earth.

The uncrewed Artemis I mission has a two-hour launch window that opens at 8:33 a.m. EDT (6 p.m. India time) on August 29 from Kennedy Space Center’s Launch Pad 39B in Florida in the US.

Artemis I will lay the foundation for a sustained long-term presence on and around the Moon.

“The SLS rocket and integrated Orion spacecraft will help us get a feel for what astronauts will experience on future flights. Artemis I is an important step in NASA’s long-term goals for space exploration, paving the way for us to land the first woman and the first person of colour on the Moon,” the space agency said in a statement.

The primary goal of Artemis I is to thoroughly test the integrated systems before crewed missions by operating the spacecraft in a deep space environment, testing Orion’s heat shield, and recovering the crew module after reentry, descent, and splashdown.

The US space agency last week identified 13 candidate landing regions near the lunar south pole, as it prepares to send humans back to the Moon under the Artemis programme in 2024.

Each region contains multiple potential landing sites for Artemis III, which will be the first of the Artemis missions to bring crew to the lunar surface.