Navy recovers bodies of all missing students on Andhra beach 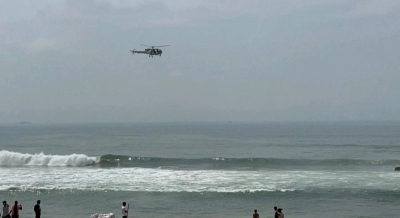 The Indian Navy on Saturday recovered five bodies of the engineering students who went missing at the beach in Andhra Pradesh’s Anakapalli district on Friday.

The Indian Navy and Coast Guard completed the search operation with two helicopters and four boats at Pudimadaka beach off Bay of Bengal.

A total of six students were drowned and one was rescued in the tragedy that struck a group of students who had entered the waters.

Bodies of P. Ganesh and K. Jagadeesh were recovered on Saturday morning. Later, the bodies of B. Satish Kumar and Rama Chandu were found. The rescue workers also pulled out the body of S. Jaswanth Kumar.

The body of G. Pavan Kumar (19) was recovered on Friday.

Local fishermen with 20 boats helped in the search operation. Police and the revenue department also assisted the rescue personnel.

A joy trip of 15 friends at the beach turned tragic when one of them drowned and five others went missing. Fishermen rescued another youth identified as S. Teja. He was shifted to a KGH Hospital at Visakhapatnam.

According to police, the students of a private engineering college at Anakapalli town had gone to the beach, about 50 km from Visakhapatnam. Seven of them had stepped into the waters. They were apparently pulled deeper into the waters by strong waves.

The beach where the incident occurred is not a tourist place but some people visit the place despite warning signs installed there. District Superintendent of Police S. Gauthami, who was supervising the rescue operations along with other top officials, said though the marine police do the patrolling to warn people going closer to the coast, an unfortunate mishap occurred on Friday.

Families of the students blamed the college management for the tragedy. They said the college authorities acted with negligence.

Israel to be inducted in Taekwon-do Hall of Fame