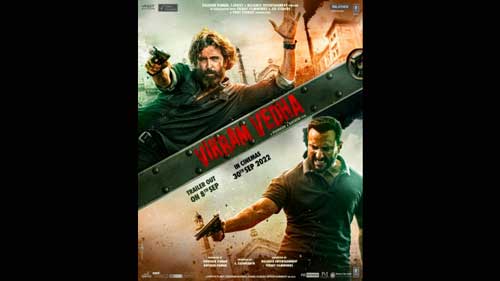 A new poster from the Hrithik Roshan and Saif Ali Khan-starrer ‘Vikram Vedha’ was unveiled on Sunday.

The poster brings Hrithik Roshan and Saif Ali Khan together in the same frame, giving a glimpse of the action that the audience will get to see on the screen.

In the poster, Hrithik can be seen in a sliding position holding a gun, while Saif looks intense in his cop avatar. The poster also reveals the release date of its trailer that the audience is eagerly waiting to see.

For the fans of both the actors, who have been waiting for the trailer with bated breath, it will drop on September 8.

‘Vikram Vedha’ is the Hindi remake of the runaway Tamil hit of the same name which was released in 2017.

The film, which starred R. Madhavan, Vijay Sethupathi as the leads, was inspired by the Indian folktale ‘Baital Pachisi’ and was directed by director duo Pushkar and Gayatri.

The film tells the story of Vikram (Saif), a police inspector who sets out to track down and kill Vedha (Hrithik), a gangster.

The film, presented by Gulshan Kumar, T-Series, and Reliance Entertainment in association with Friday Filmworks and Jio Studios and a YNOT Studios Production, will hit the big screens globally on September 30.