Neymar could face jail term, hefty fine for discrepancies in his transfer from Santos to Barca 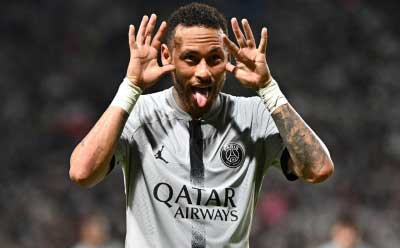 Paris St. Germain striker Neymar could face a jail term of two years or more and a fine totalling 10m euros for discrepancies in his transfer from Brazilian giants Santos to La Liga heavyweight Barcelona nine years back.

While Neymar enjoyed a lot of success at Barcelona, spending four years there before moving to French giants PSG in 2017, the ghost of his transfer to the Spanish club has haunted him all along and a final hearing is scheduled in the Barcelona court in October.

A report in Barca Universal said on Wednesday that Neymar’s signing at Barcelona involved a lot of “corrupt dealings on the part of then-club president Sandro Rossell”, who “colluded” with the Brazilian footballer’s father and agent, and a former Santos FC director to facilitate the deal.

DIS, the company which reportedly owned 40 per cent rights of Neymar at the time of his transfer to the La Liga giants, lodged a complaint seven years ago, claiming they had been “defrauded by the player, his family and Barcelona”, the report said.

The case is ongoing and the final hearing will take place on October 17 where Neymar will go on trial for the corruption case a month before the FIFA World Cup 2022 kicks off in Qatar. The report added that “the prosecution wants the court to hand him a two-year prison sentence and a fine of 10 million euros”.

However, DIS, have reportedly said they want a “much harsher punishment for the Brazilian”. They want Neymar to serve a five-year sentence and also be banned from playing football for the same duration.

The case dates back to 2013 when Barca claimed they paid 57m euros to sign Neymar from Santos, but it later emerged the transfer fee was in the region of 80m euros, or more. Neymar’s father was said to have received a big percentage of the final fee through a company he owned.

DIS considers it was the victim of deception woven by the player, his relatives and Barca and claims compensation of more than 150m euros. Reportedly Neymar’s father signed two contracts with Barca while ignoring the fact that the footballer’s rights belonged to DIS.