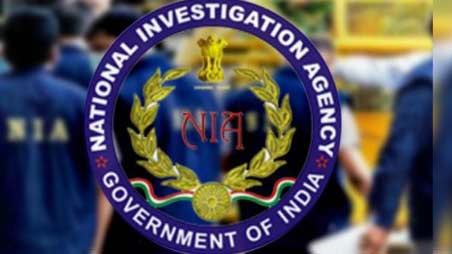 The National Investigation Agency (NIA) Sunday conducted searches at 13 locations across six states in a case related to Islamic State conspiracy to spread terror in the country.
“NIA conducted searches at 13 premises of suspects in 6 states viz. Bhopal and Raisen districts in Madhya Pradesh; Bharuch, Surat, Navsari and Ahmedabad districts in Gujarat; Arariya district in Bihar; Bhatkal and Tumkur City districts in Karnataka; Kolhapur and Nanded districts in Maharashtra; and Deoband district in Uttar Pradesh in the case pertaining to activities of ISIS. The case was registered suo-moto by NIA on 25.06.2022 under sections 153A & 153B of IPC and sections 18, 18B, 38, 39 & 40 of UA(P) Act,” a statement from the NIA read.
The agency said searches have led to seizure of “incriminating documents/material”.
The NIA Sunday also conducted searches in Trivandrum district in Kerala in a case pertaining to the arrest of one Sathik Batcha alias ICAMA Sathik, who was arrested along with four others in Tamil Nadu in February this year.
According to the NIA, the accused had hatched a conspiracy for threatening the general public and police officials and also attempted to murder police personnel during the checking of their Scorpio car when they were intercepted on February 21, 2022. “The accused persons were also involved in inciting hatred for secession of a part of India and had intended to disrupt the sovereignty and territorial integrity of India by forming outfits like ‘Khilafah Party of India’, ‘Khilafah Front of India’, ‘Intellectual Students of India (ISI)’ and associating themselves with the proscribed terrorist organisations ISIS/Daesh and Al Qaeda,” the NIA said in a statement.
The case was earlier registered by Tamil Nadu police and later taken over by the NIA. “The search conducted today have led to seizure of digital devices and incriminating documents,” the NIA statement said.