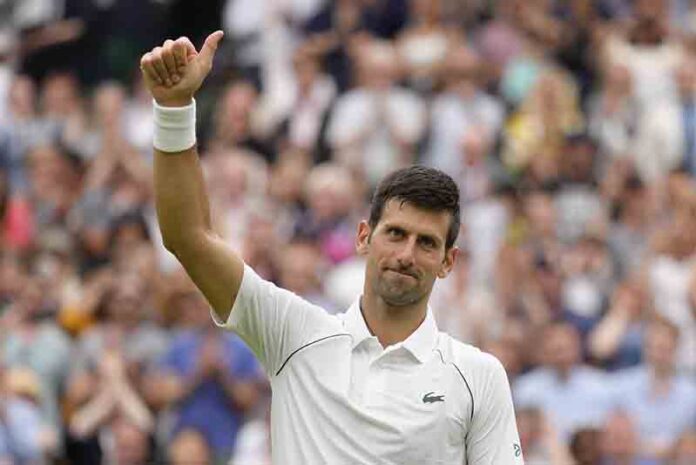 Defending champion Novak Djokovic recorded a routine win over Australian Thanasi Kokkinakis as the top seed eased into the Wimbledon third round.
The 35-year-old Serb is aiming to win a fourth successive title at SW19, where he is a six-time winner.
The vastly superior Djokovic, a 20-time major winner, was in fine form in a 6-1 6-4 6-2 win against the world number 79 on Centre Court.
He will next play compatriot Miomir Kecmanovic or Chilean Alejandro Tabilo.
Kokkinakis made a promising start as he claimed the opening point of the match on title-favourite Djokovic’s serve with a delicate touch over the net.
But any hint of an upset was quickly dismissed by Djokovic, who initially struggled for rhythm in his first-round match against Kwon Soon-woo before coming through in four sets. Following that match, Djokovic said the possibility of not being allowed to contest another Grand Slam for 11 months because of his vaccination status was serving as “motivation” at Wimbledon this year.
In a dominant display, the former world number one consolidated an early break of serve to take a 3-0 lead – and he put the first set beyond doubt as he struck again before serving out the first set to love.
Djokovic clinched another early break in the second to once again put Kokkinakis on the back foot, his versatility around the court – including some spectacular net-play – leaving the improved Australian with no answer despite his best attempts.
There was to be no let-up, as a break of serve at the start of the third set, reinforced with another for a 4-1 lead, helped polish off a commanding win – despite Kokkinakis reaching a first break point in the final game.