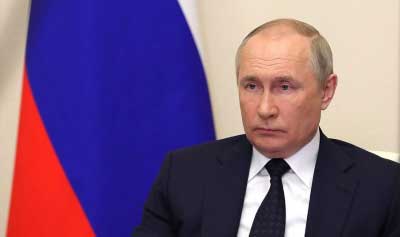 Russian President Vladimir Putin said that there can be no winners in a nuclear war and must never be fought.

He made the remarks on Monday in his greeting to the 10th Review Conference of the Parties to the Treaty on the Non-Proliferation of Nuclear Weapons.

“We believe that there can be no winners in a nuclear war, and it must never be fought; we advocate equal and inseparable security for all members of the international community,” TASS News Agency quoted the President as saying.

Putin said that Russia as signatory to the NPT consistently followed its letter and spirit.

“Our obligations under bilateral agreements with the United States on the reduction and limitation of relevant weapons have also been fulfilled.”

The Russian leader stressed that “we are convinced that all NPT-compliant countries should have the right of access to civilian nuclear power without any additional terms whatsoever”.

“We are ready to share with the partners our experience in the field of nuclear energy,” he added.

In conclusion, Putin said that Russia hopes this conference will make a significant contribution to strengthening the nuclear non-proliferation regime to ensure peace, security and stability in the world, Xinhua news agency reported.

The NPT Review Conference is held once in five years. The 10th one was to be held in New York in May 2020, it was delayed due to the Covid pandemic and rescheduled for August 1-26, 2022.

The NPT was signed in 1968 and legitimised the nuclear arsenals of the US, UK, China, Russia, and France.

Other states, by signing the document, are stripped of the right to create or acquire weapons of mass destruction.

More than 190 countries are now parties to the treaty.

While Israel, India and Pakistan remain outside the treaty, North Korea withdrew from the agreement in 2003.

Will use military force to annex Taiwan: China