Only one NESIDS project out of 17 completed in Nagaland 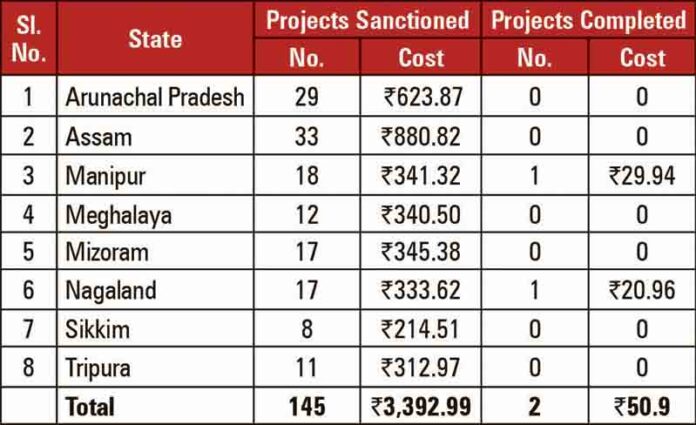 Out of the 17 projects worth Rs.333.62 crore sectioned for Nagaland under North East Special Infrastructure Development Scheme (NESIDS), only one project has been completed till date.
Giving a written reply in Rajya Sabha on Thursday, Minister of Development of North Eastern Region (DoNER), G Kishan Reddy, disclosed that completion certificates of only two projects (Nagaland worth Rs. 20.96 crore and Manipur worth Rs. 29.94 crore) worth Rs.50.90 crore have been received from the state governments as on July 20, 2022.
The Ministry had sanctioned 145 projects worth Rs.3,392.99 crore for the North Eastern States under NESIDS. (See table)
Under the Non-Lapsable Central Pool of Resources (NLCPR) scheme, the DoNER minister said that out of 1,642 sanctioned projects worth Rs.17,470.99 crore, 1,278 projects worth Rs.10,919.76 crore have been completed by July 20, 2022.
Further, Reddy informed that three projects costing more than Rs.100 crore, which have been sanctioned for NE state under NESIDS, included upgradation of 132 KV Surjamaninagar Sub-Station into 400 KV in Tripura worth Rs.120.88 crore, construction of double lane road from Lanka to Umrangso via Diyungmukh, Haflong Tinali and Panimur, Assam worth Rs.227.17 crore and alternate gravity water supply scheme of Aizawl, Mizoram worth Rs. 114.20 crore.