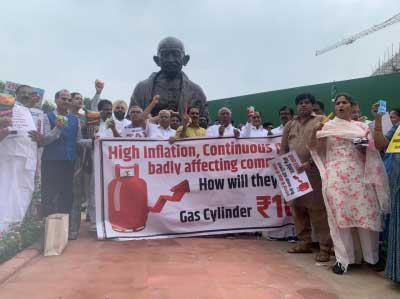 Congress and other like-minded opposition parties held a joint protest against the price rise and increase in the GST rates of essential commodities in the Parliament House complex even as Prime Minister Narendra Modi held a meeting with senior ministers on Friday.

The face-off with the government continued on the fifth day as the opposition continued with its protests.

No government business was conducted in both the Houses due to stiff opposition on Thursday. The government decided not to go ahead with Bills as the opposition was absent.

The Monsoon Session started on Monday and since then the opposition has been pressing for discussion on the GST and price rise issue.

Congress MP Kodikunnil Suresh has given adjournment motion notice in the Lok Sabha on the issue of unemployment while in the Rajya Sabha too suspension of business has been given by the opposition.

Congress spokesperson Jairam Ramesh said, “Yet again the Modi Sarkar refused an urgent debate in the Rajya Sabha on galloping price rise and senseless increase on GST rates on food items. House adjourned till 12 noon. The Opposition is united that we want debate on this critical issue impacting crores of Indians.”