Owaisi’s car fired upon in poll-bound UP, urges EC to take note 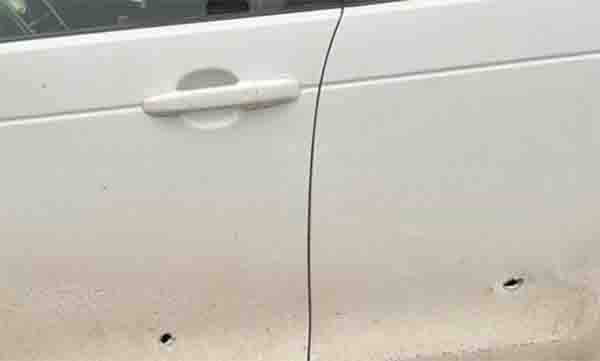 AIMIM chief and Lok Sabha MP Asaduddin Owaisi’s car was allegedly fired upon in Hapur while he was returning to Delhi after attending election-related events in western Uttar Pradesh.
Owaisi’s vehicle was near the Chhijarsi toll plaza on the Hapur-Ghaziabad stretch of the National Highway 24 when the incident took place at around 6 pm, he said.
No one was injured in the incident, Owaisi said.
The Hapur Police said one person involved in the firing has been arrested while multiple teams are investigating the case.
“Some time ago my car was fired at near Chhijarsi toll gate. Four rounds of shots were fired. There were 3-4 people, all of them ran away and left the weapons there. My car got punctured, but I moved to another car and left. We are all safe. Alhamdu’lilah,” Owaisi tweeted in Hindi.
The All India Majlis-e-Ittehadul Muslimeen (AIMIM) president and Hyderabad MP said he had left Delhi in the morning for election-related programmes in Meerut and Kithore, where he held a foot march at 3.30 pm.
Owaisi’s convoy had four cars, he said.
We were at the toll gate and had slowed down when we suddenly heard three-to-four rounds of gunshots. My car also got some dents and a tyre got punctured,” he later told reporters.
“I urge the EC to ensure an independent probe into the incident. It must be known who is behind this incident. It’s also an appeal to the Modi government and the Yogi government,” he added. Hapur Superintendent of Police Deepak Bhuker said one accused involved in the episode has been arrested and police are confirming the details of others and their motive.
“We are also finding out how they planned this (shooting). Since the incident took place at the toll plaza, we are also checking the CCTV footage available there.
Police teams have been deployed and very soon others involved in the episode will also be held,” he told reporters. The officer said the investigation was at the preliminary stage and other facts and details would be shared as and when available.
Meanwhile, senior district officials, including those from the administration and the police, reached the incident site, where several activists and supporters of the AIMIM had started gathering after the shootout.