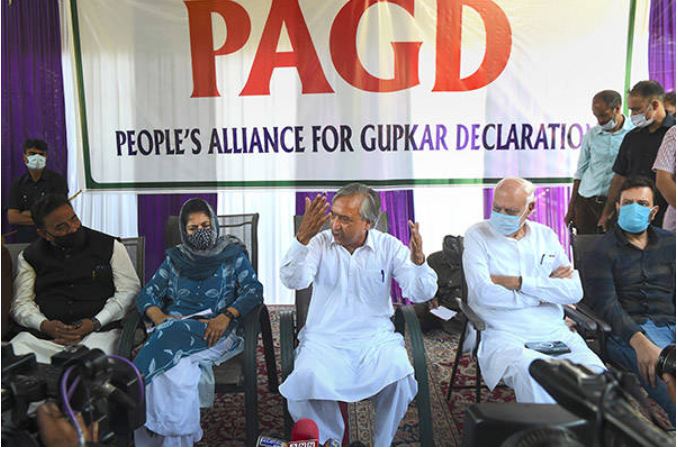 The People’s Alliance for Gupkar Declaration (PAGD) on Tuesday demanded the restoration of the pre-August 5, 2019 constitutional position of the erstwhile state of Jammu and Kashmir, saying it would continue the fight to seek the rights guaranteed by the Constitution.

The alliance of the six mainstream political parties, which seek the restoration of the special status of the erstwhile state, held a meeting at its chairman and National Conference president Farooq Abdullah’s residence at Gupkar here.

The meeting was also attended by the middle and lower rung leaders of the constituent parties of the alliance.

Speaking to reporters after the meeting, PAGD spokesperson and CPI(M) leader M Y Tarigami said seeking the restoration of the special status, which was revoked by the Centre on August 5, 2019, is the constitutional right of the people of the erstwhile state.

“We are not seeking anything other than the restoration of the special constitutional position that Jammu, Kashmir and Ladakh had till August 4, 2019. It is our constitutional right,” he said.

Tarigami, who was flanked by other leaders of the alliance, including Abdullah and PDP president Mehbooba Mufti, said a few people were interpreting their demands some other way and calling them “anti-national activities”.

The alliance spokesperson said the silence in Jammu and Kashmir has been considered as normalcy.

“Even today, they think Kashmir, Jammu and Ladakh should be silent like a graveyard, and it is not acceptable to the present government and leadership that anyone should raise his voice or keep his head high,” he claimed.

“The present government has vowed to humiliate us, they think of our humiliation as their pride, which is not acceptable to us,” the CPI(M) leader alleged. Tarigami said the alliance wants to send a message to the country and its people that the PAGD is committed to seek the rights which were guaranteed by the Constitution.

The PAGD spokesperson said the alliance adopted a unanimous resolution at its Tuesday meeting, reiterating that the constitutional position of Jammu, Kashmir and Ladakh which the erstwhile state enjoyed on August 4, 2019, be restored.

“Articles 370, 35-A and full statehood has been our constitutional position and the constitution of Jammu and Kashmir, which was abolished unconstitutionally, be restored. This is our basic agenda and our basic demand,” he said.

The PAGD, he said, has vowed that insult and humiliation of the people and political leadership will not be acceptable.

Tarigami said they had raised the issue of the release of political prisoners at an all-party meeting with Prime Minister Narendra Modi, but no such prisoner has been released as a confidence building measure.

“We want to ask the government how many people have been released since the all-party meeting chaired by Modi was held,” he said.

Tarigami claimed that there is a campaign to humiliate the political leadership and workers “as if only thieves exist here”.

“This humiliation must be stopped and we will keep our case before the people of India, its civil society, media houses and Parliament. We appeal to them that this humiliation must stop or its consequences can be dangerous not only for Jammu and Kashmir but for the entire country,” he said.

He also said that all main administrative officers whether in the civil administration or police were from outside and locals were being sidelined.

Referring to the denial of the permission for the meeting in view of the Covid pandemic, Tarigami said “it seems even this small meeting is not acceptable to the administration”.